We like trees, and take no pleasure in killing something that may have been an important feature of the landscape for years, decades, sometimes centuries. They provide many advantages, including environmental, economic, and health benefits. We would much rather reduce or thin out a tree than remove it.

However, sometimes trees have to be removed. Dead or dying trees can pose a danger. Or you might have too many for the space. We have the skills, experience, and equipment for every possible kind of tree removal.

The tree trunk in the photo below was that of the big old ash in the photo above after we had dismantled the whole tree. Unfortunately it had become unsafe due to the bottom section being eaten away by a fungus, thereby creating a large cavity.

This had greatly increased the possibility of the trunk snapping perhaps in strong wind and the tree falling over and damaging the ornamental garden in which it stood, or worse still land on top of someone. We were called in to remove it. This was done by climbing the tree, dismantling it piece by piece, and lowering each piece in a safe, controlled manner using a system of ropes and pulleys as shown in the photo at the top of the page. This is tree work at its most technical. Respect to John Burton: that’s him up the tree making it happen.

Sometimes tree removal still means dismantling the tree in sections because a straight fell in one piece is not possible, but there is a clear drop zone into which the pieces can be thrown. This was the case with the dangerously damaged cherry tree below: it had an ornamental garden behind it and a fence in front. You can see the large wound on the trunk from where one half of the tree had been torn away by the wind; after that happened it was no longer safe. Fortunately on the other side of the fence (the near side in the photos) there was a field into which we could drop all the pieces, as you can see in the slideshow. If it had been a lawn we would have piled the branches on the lawn to cushion the fall of the bigger bits of wood so as to avoid damaging it. It was also good to be able to anchor into the neighbouring walnut tree. Big thanks to John Burton for the photographs. 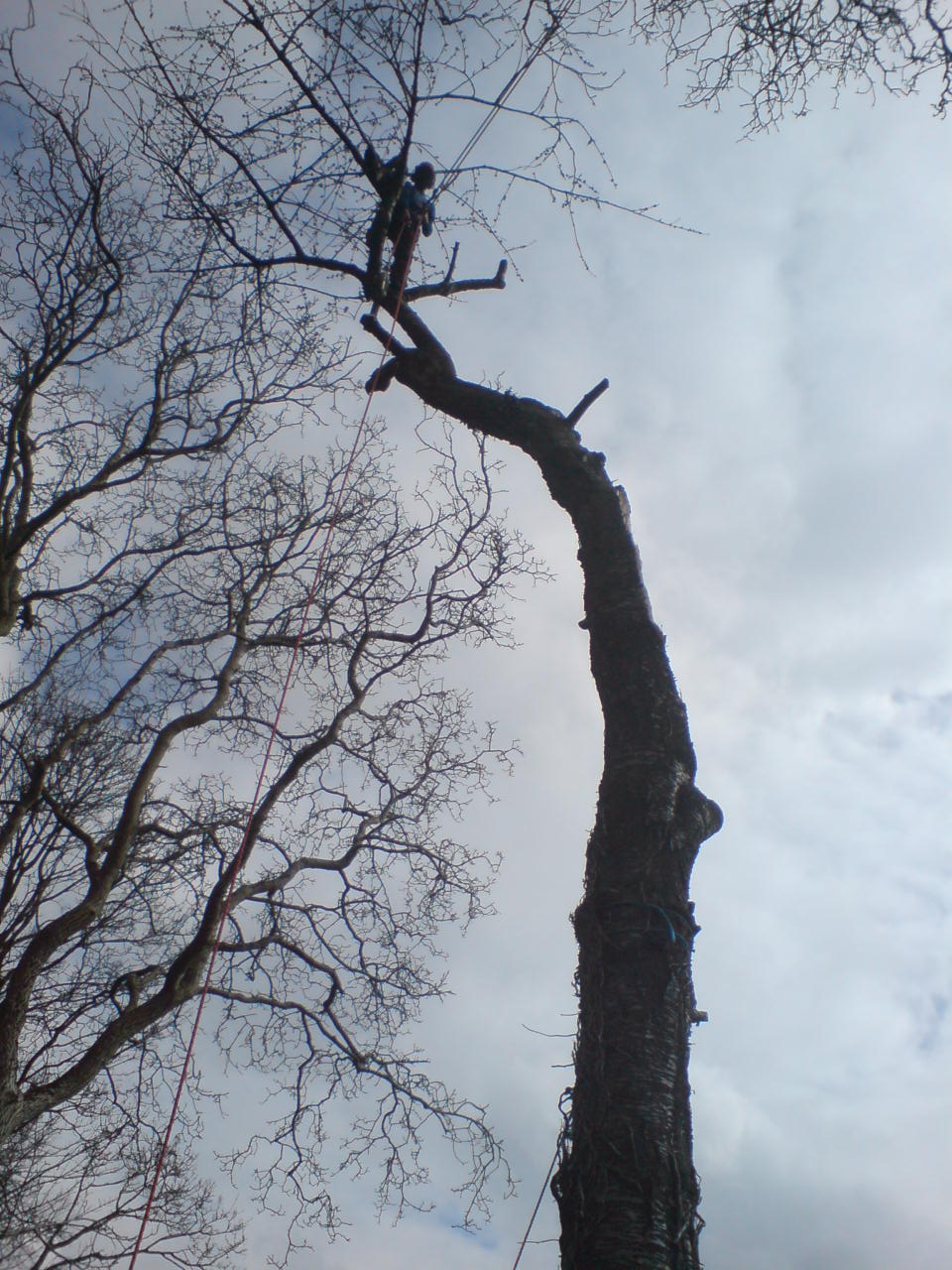 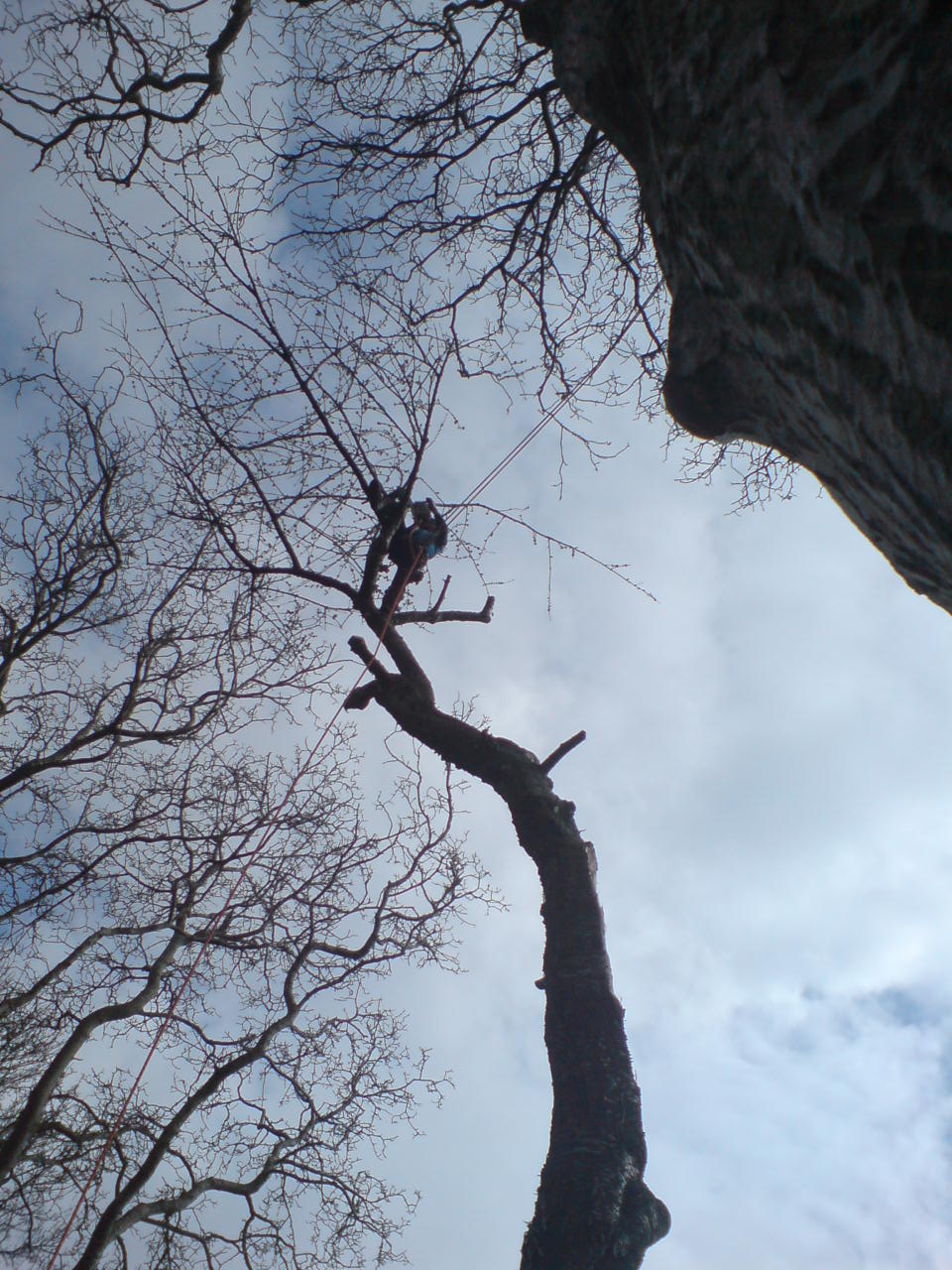 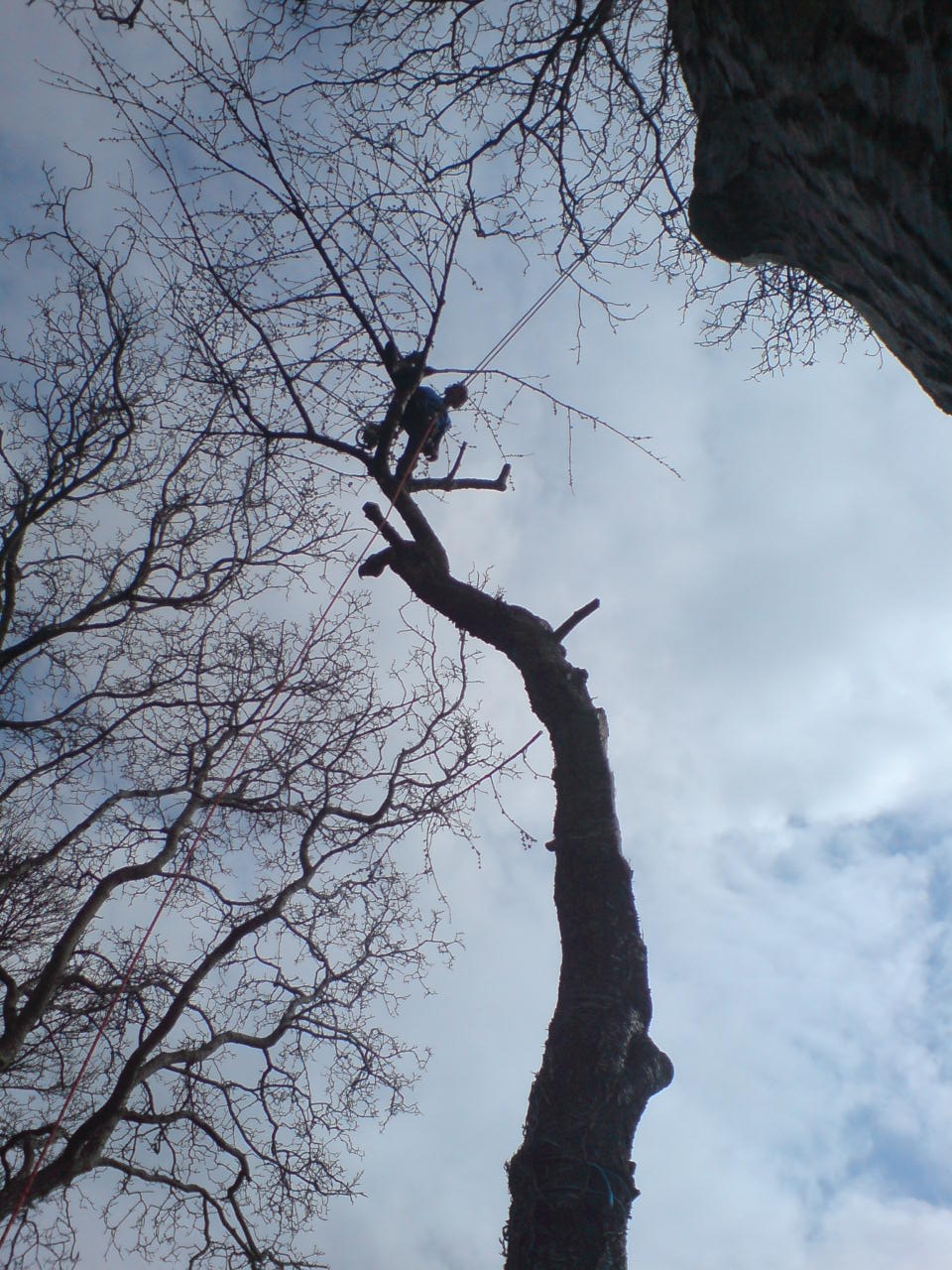 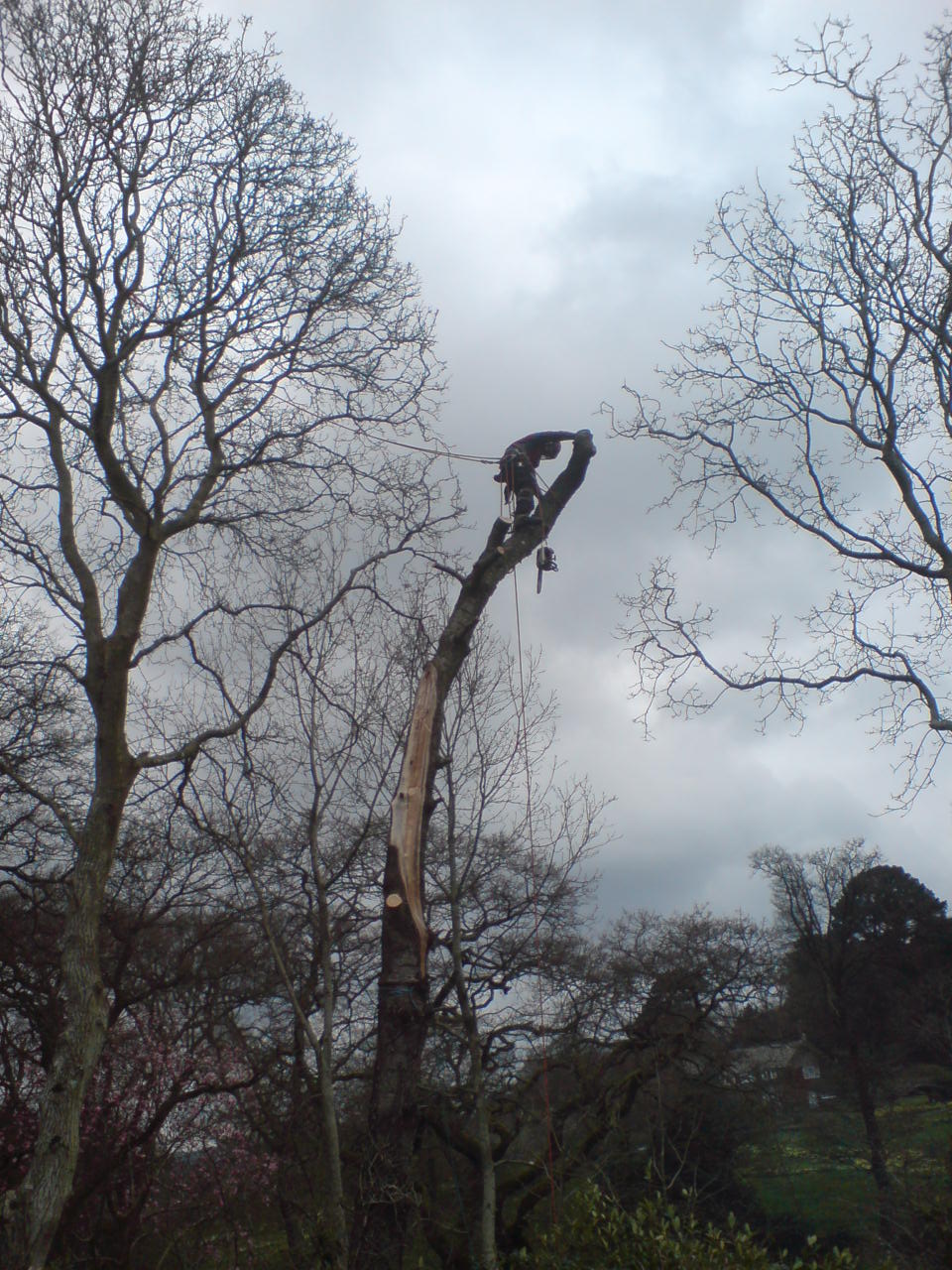 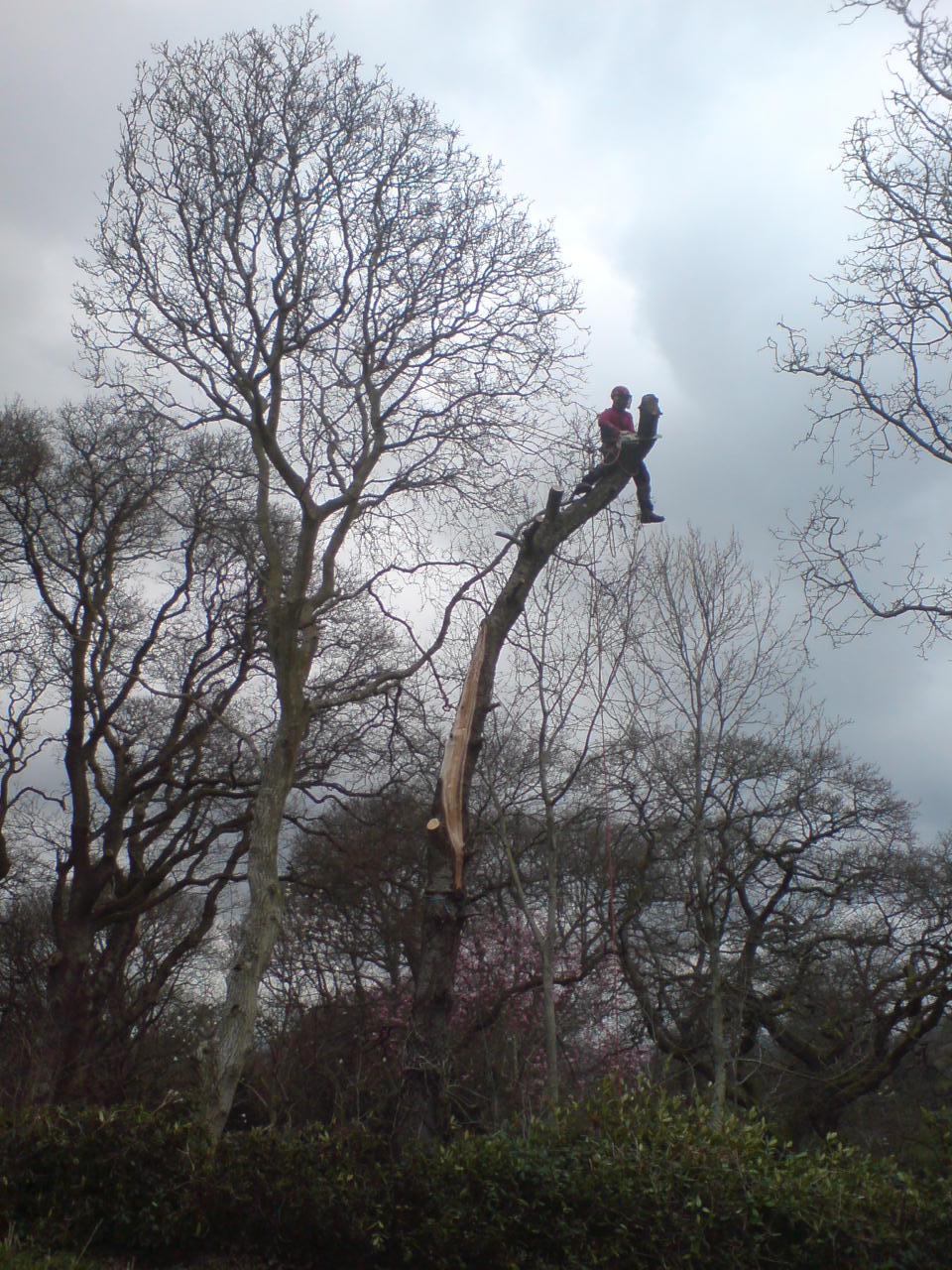 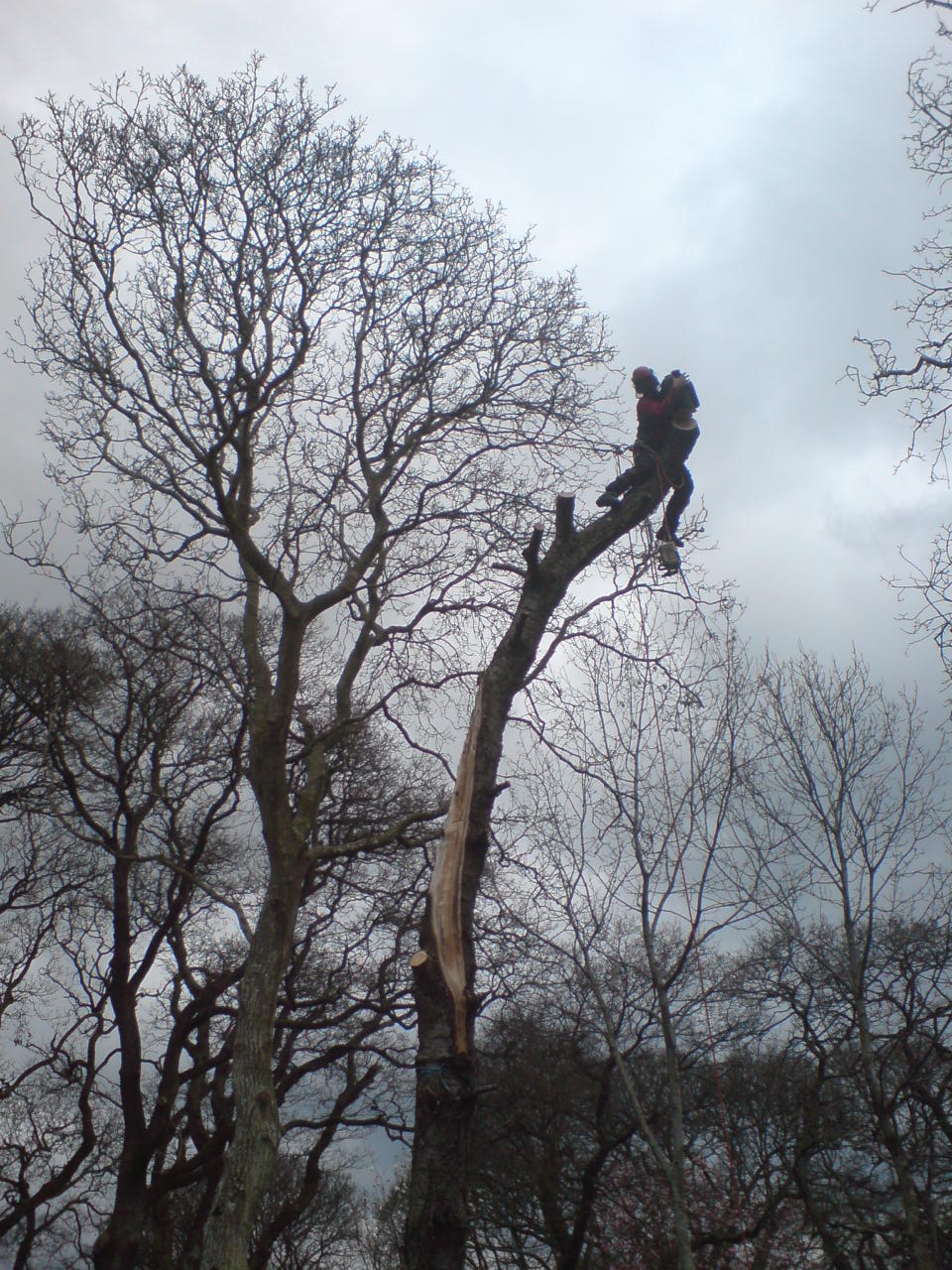 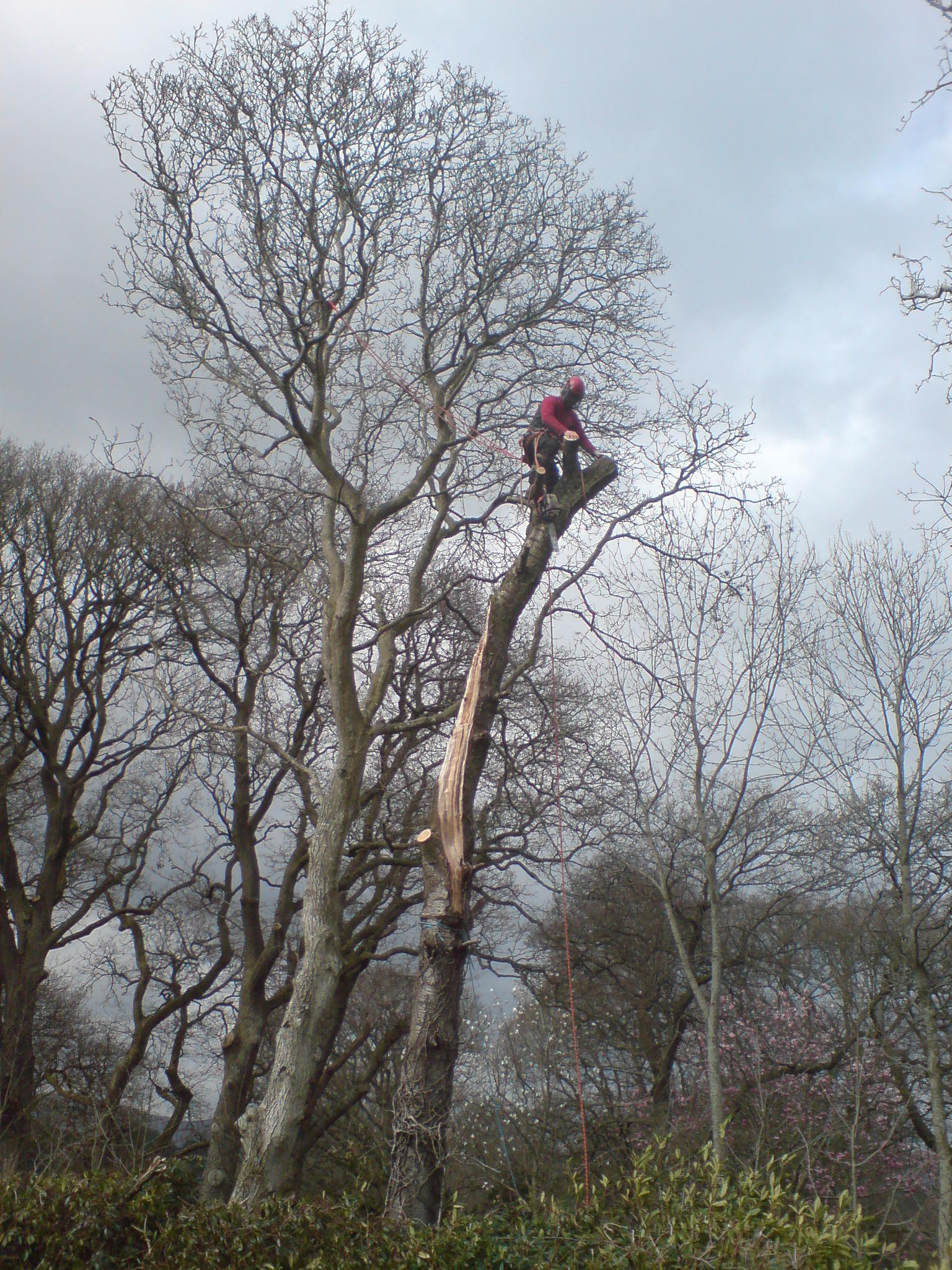 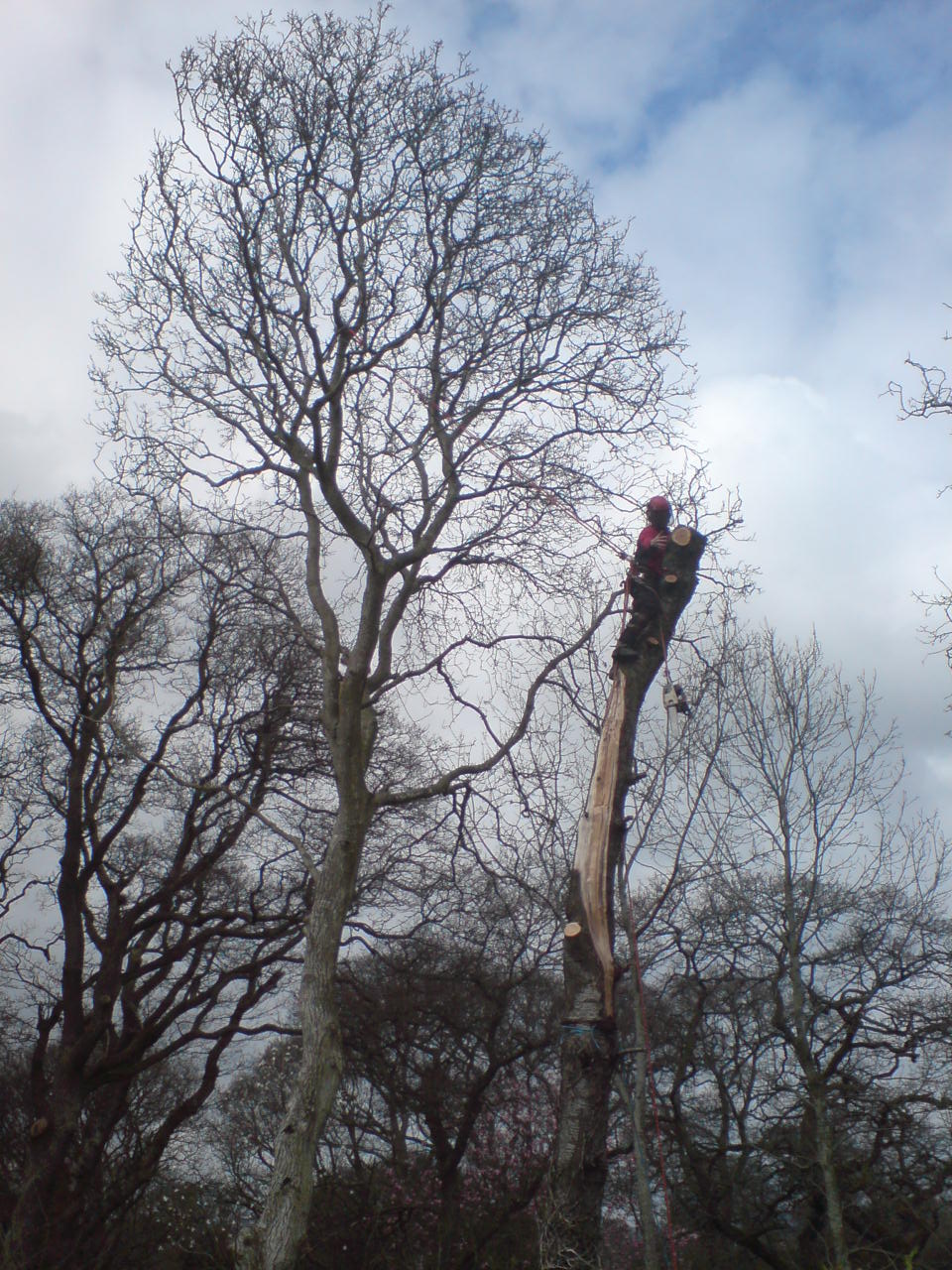 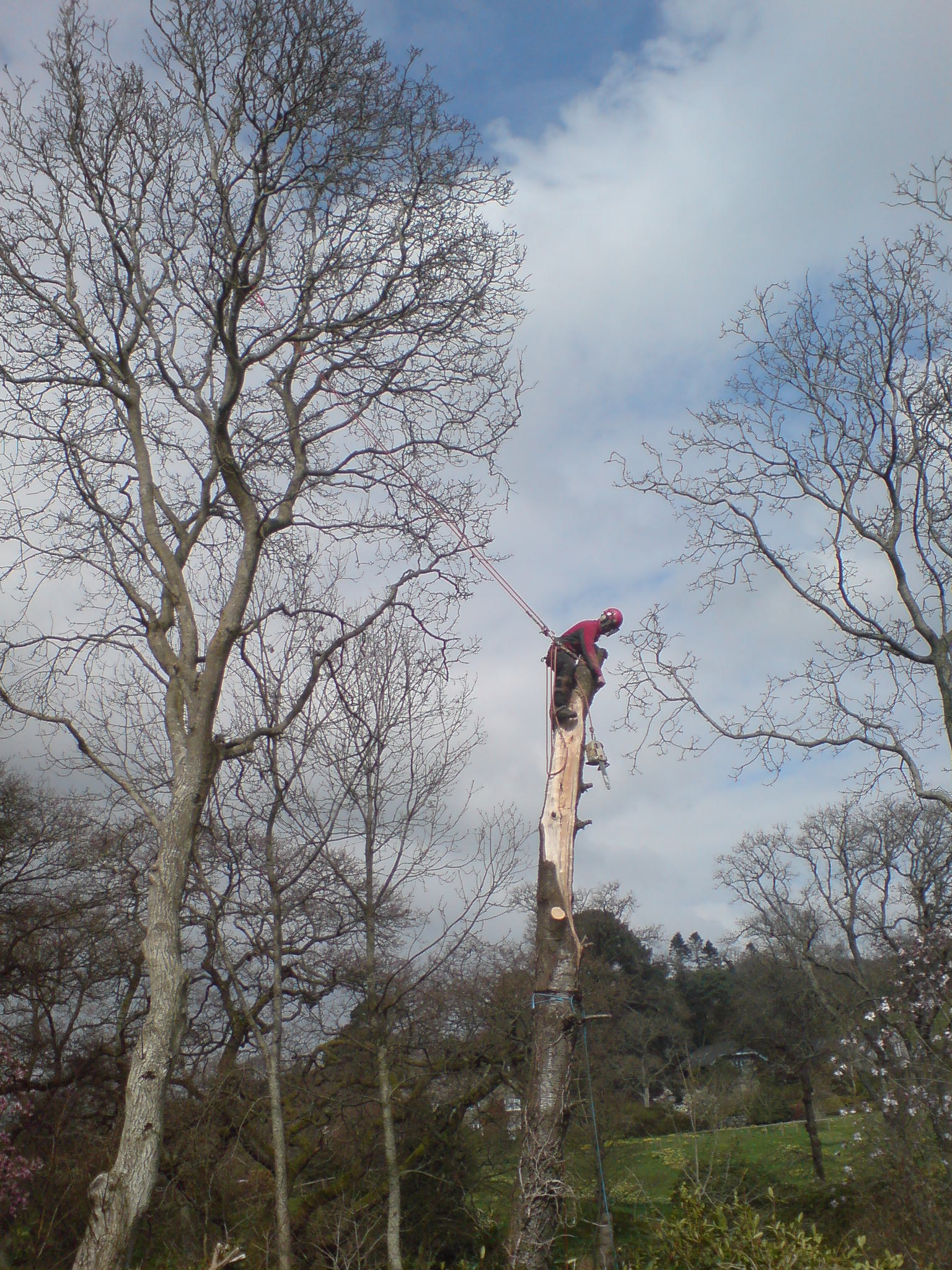 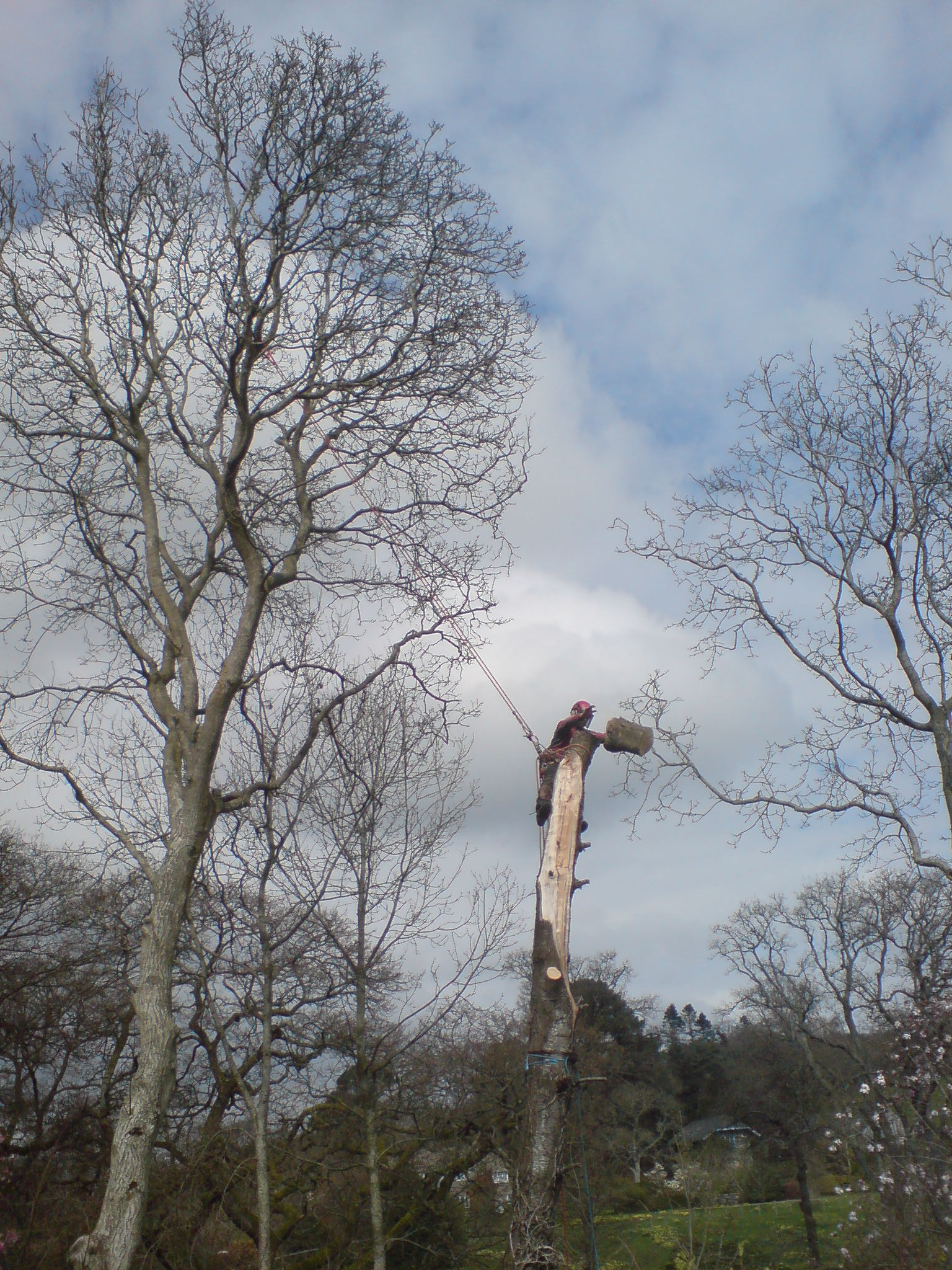 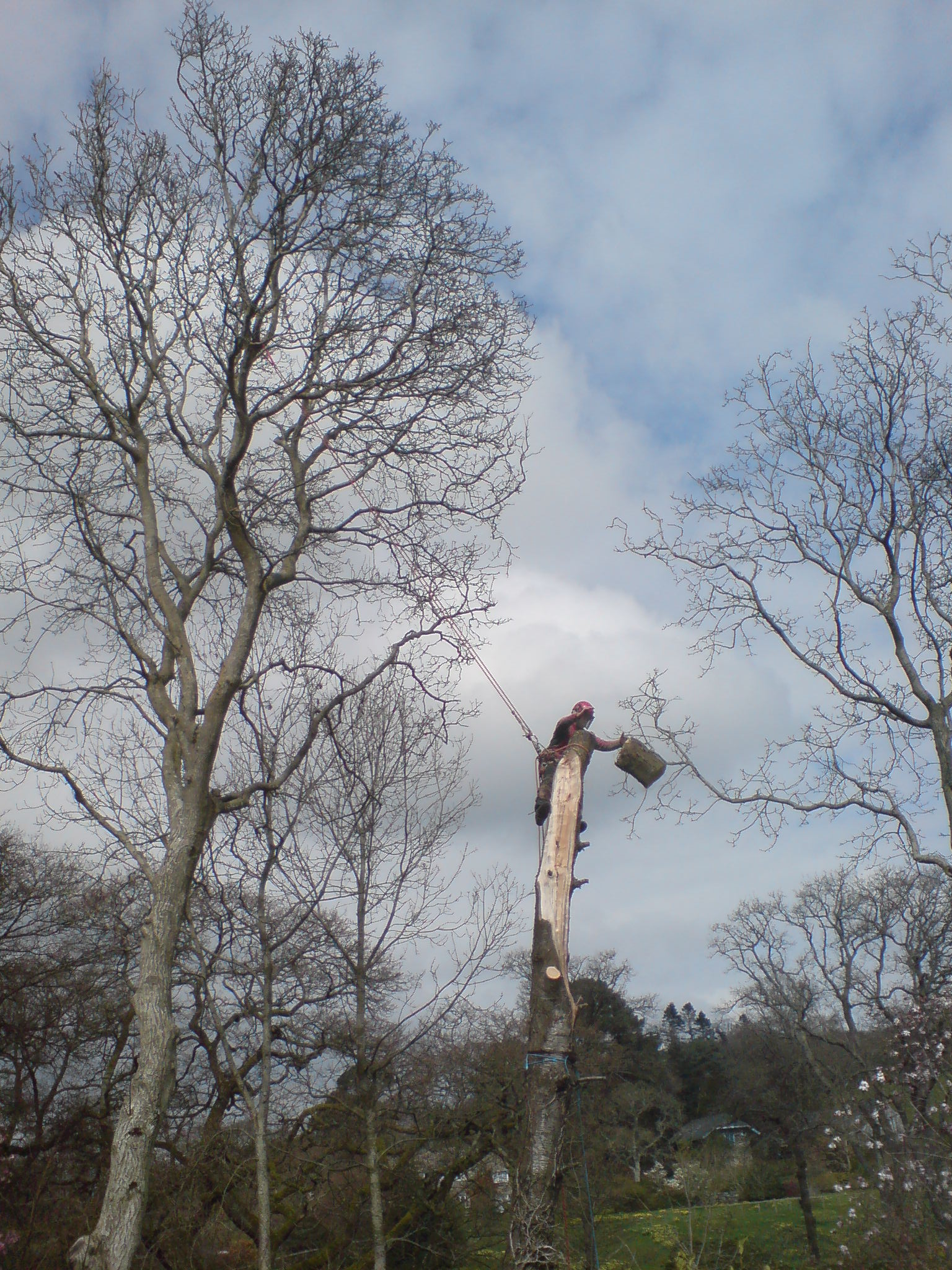 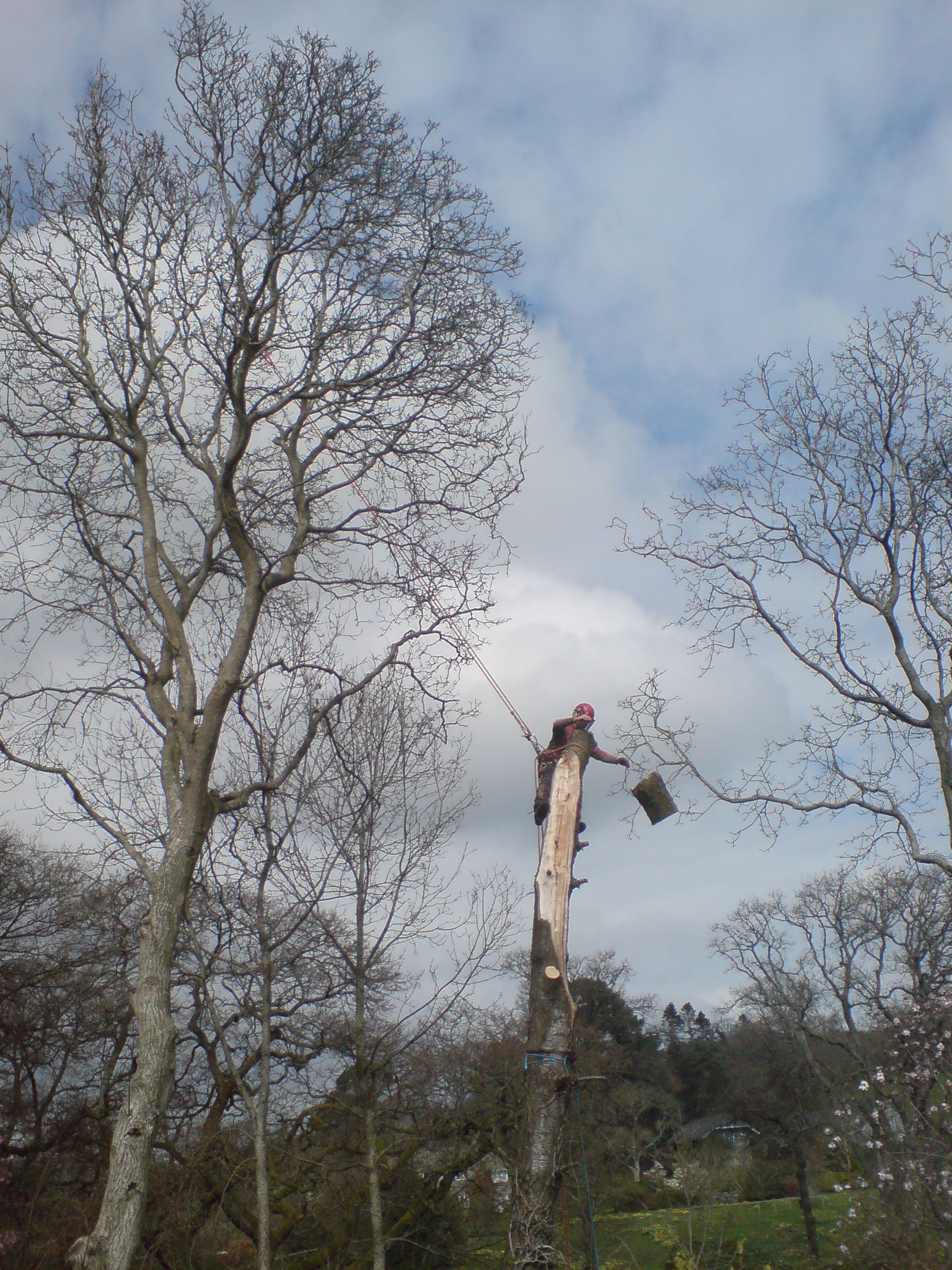 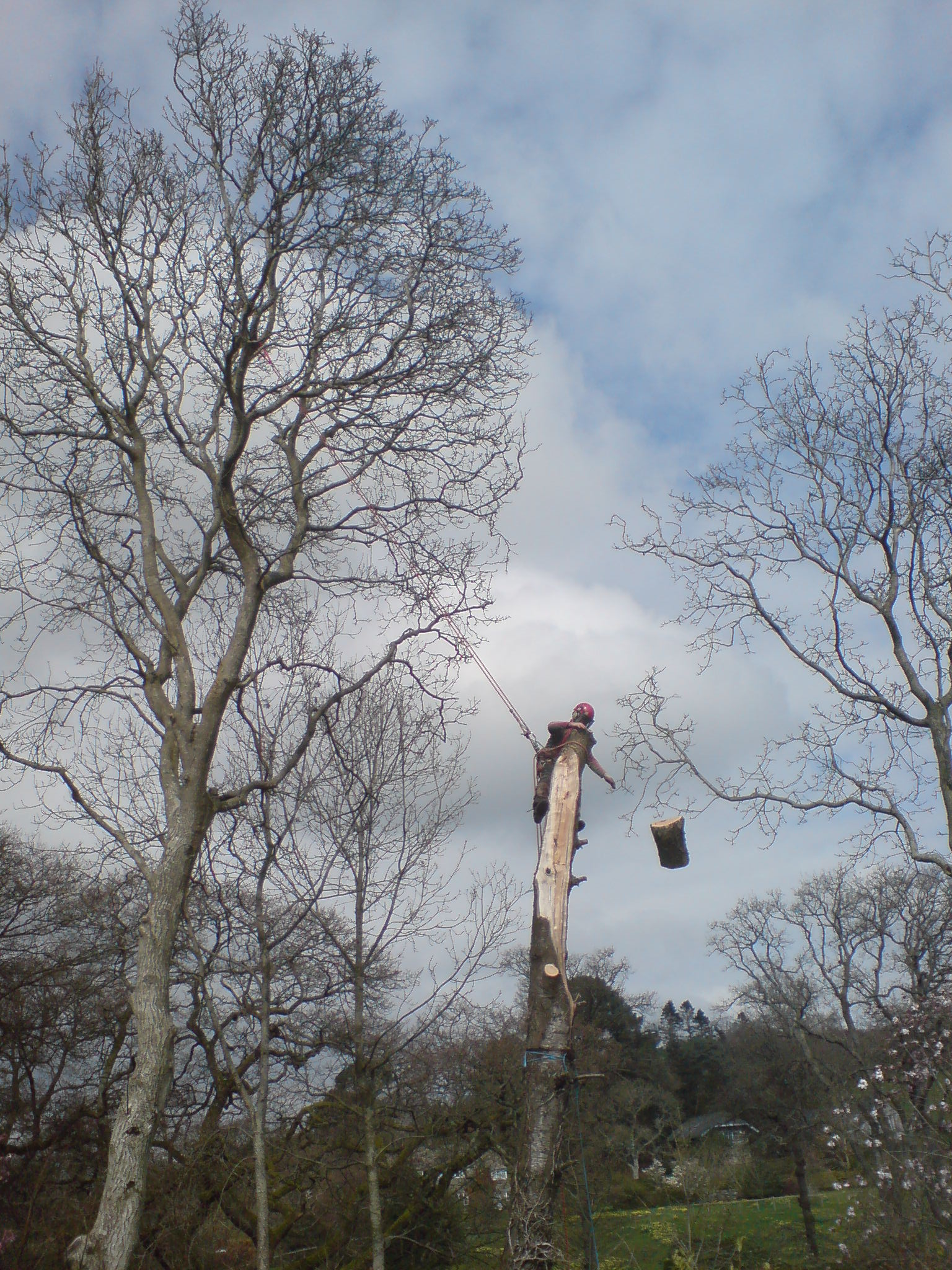 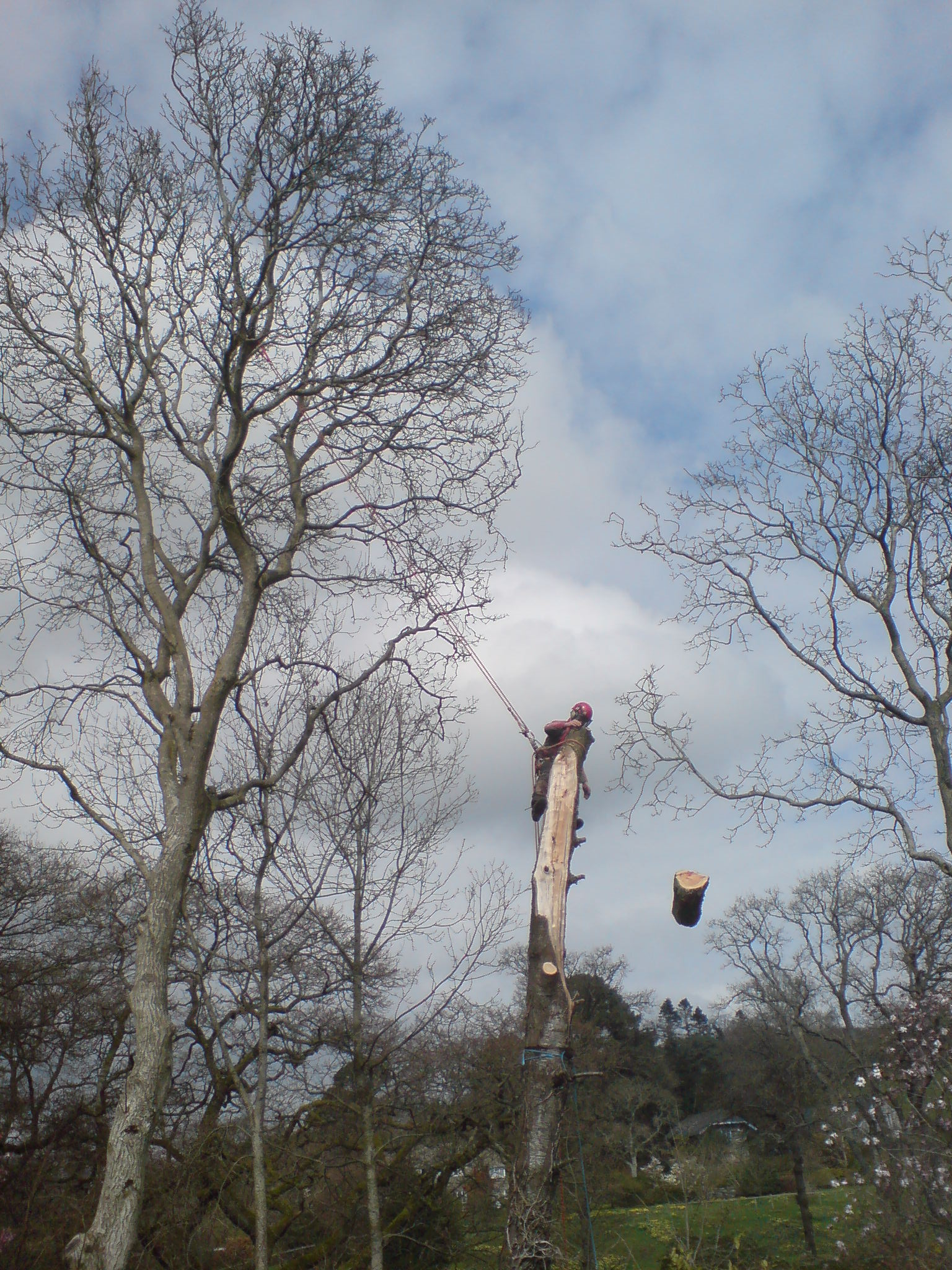 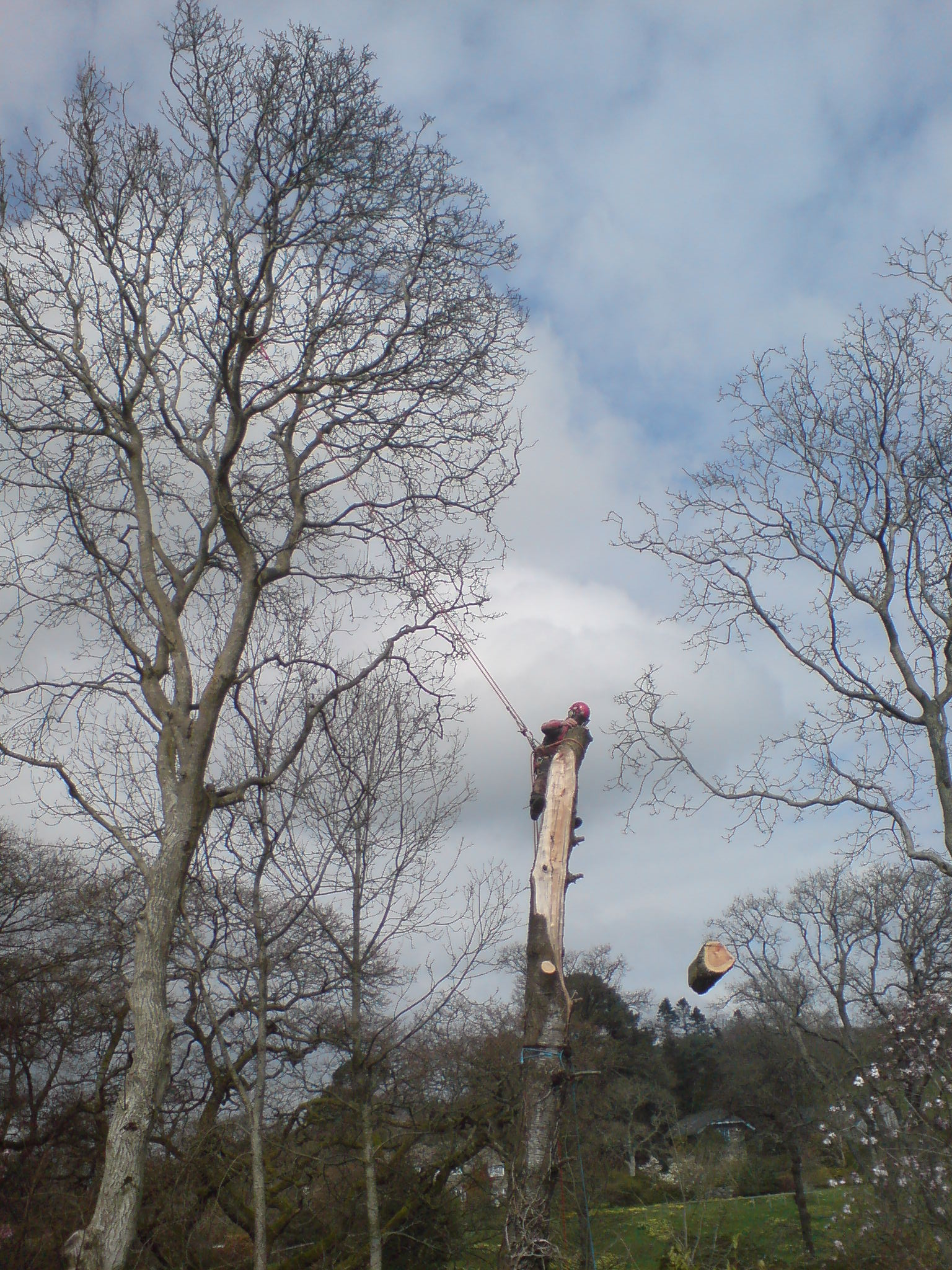 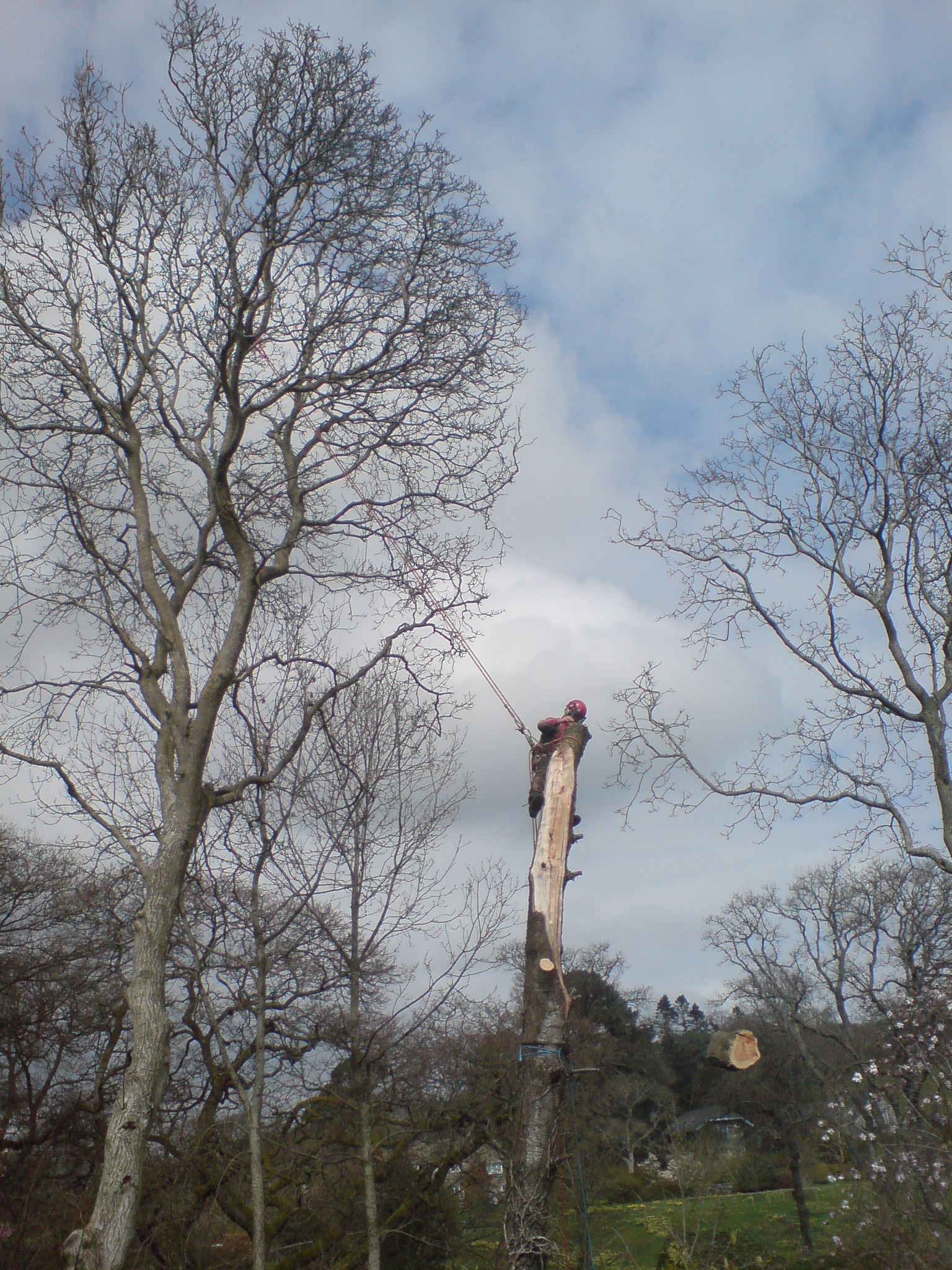 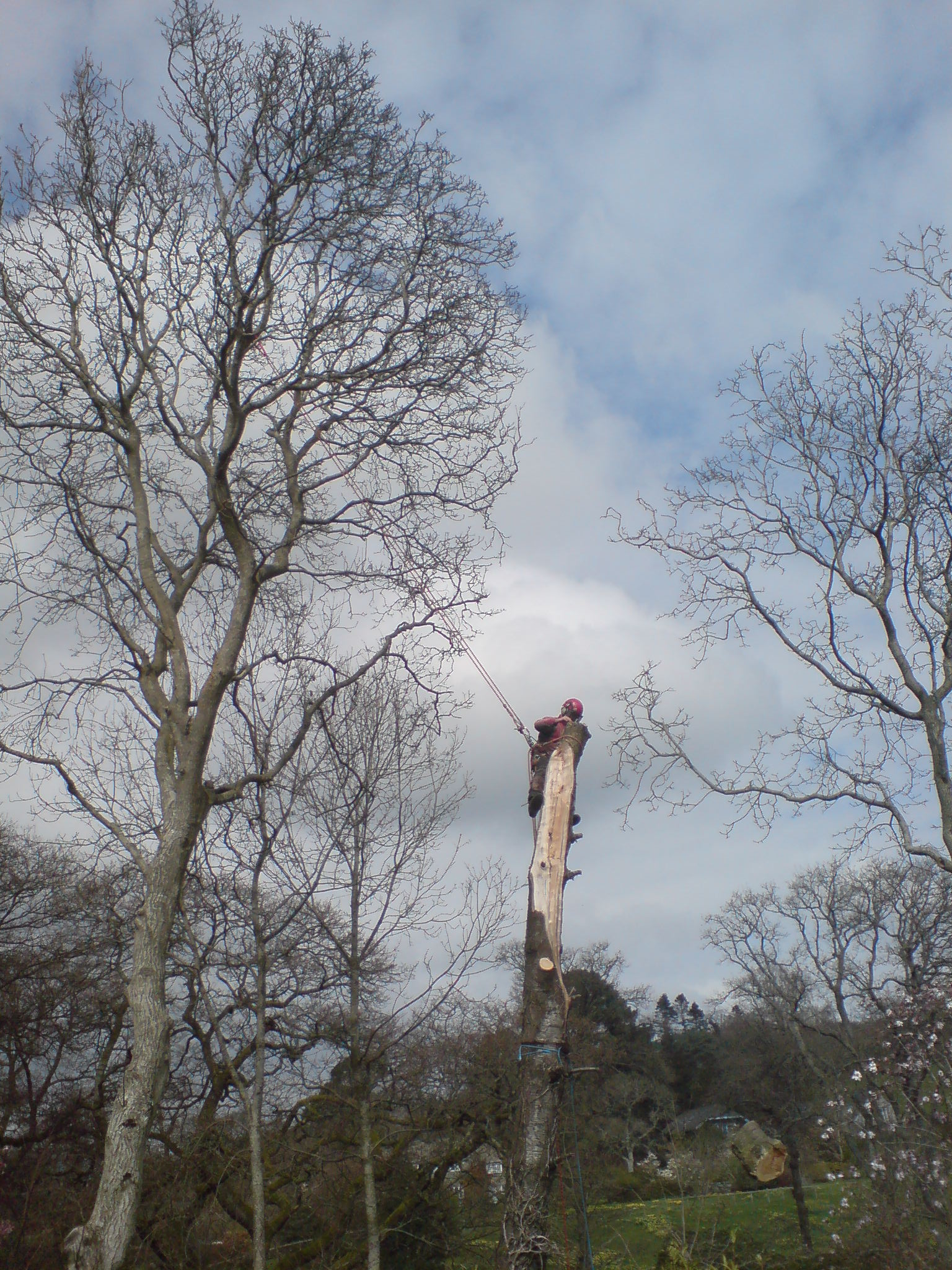 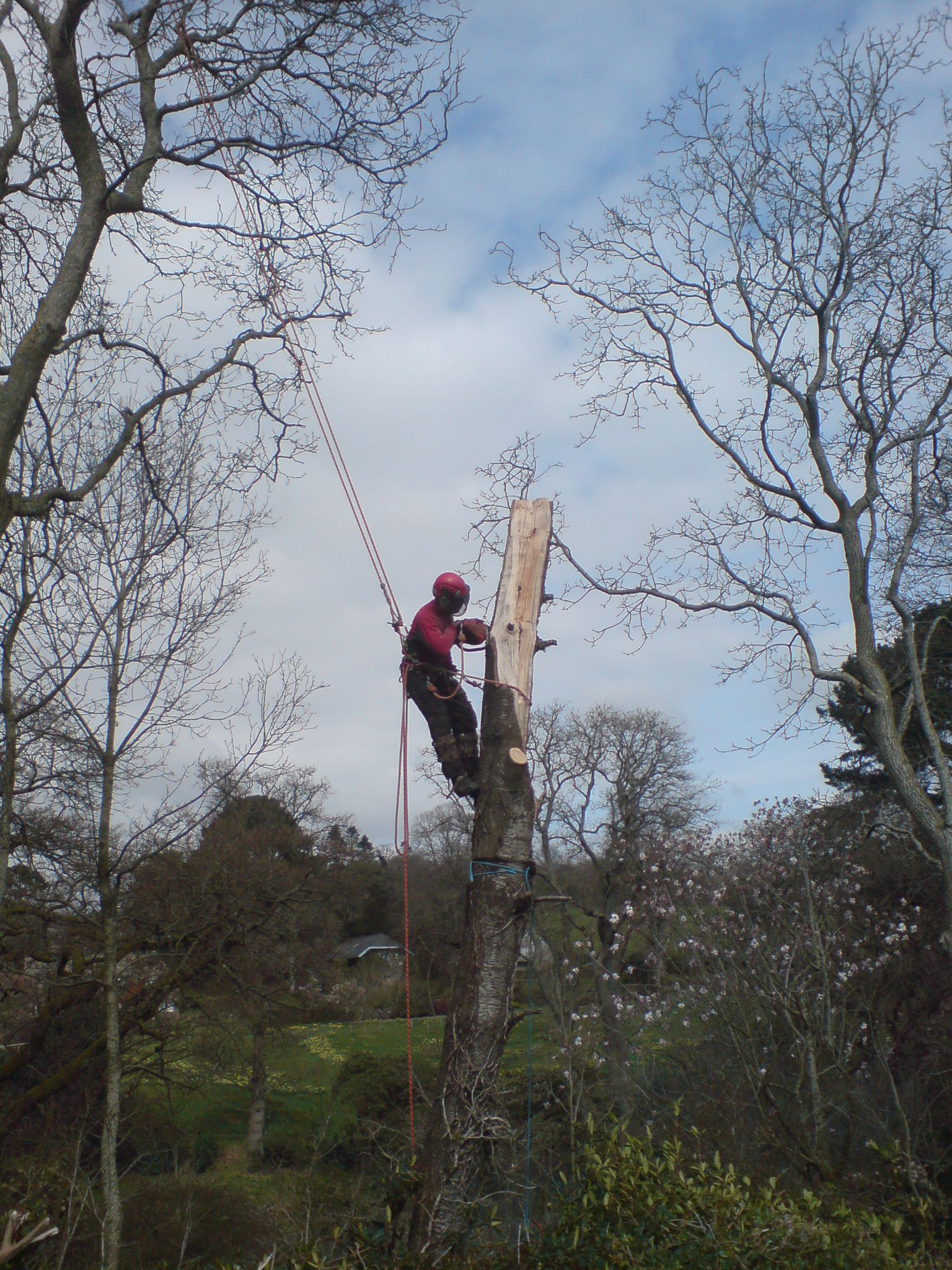 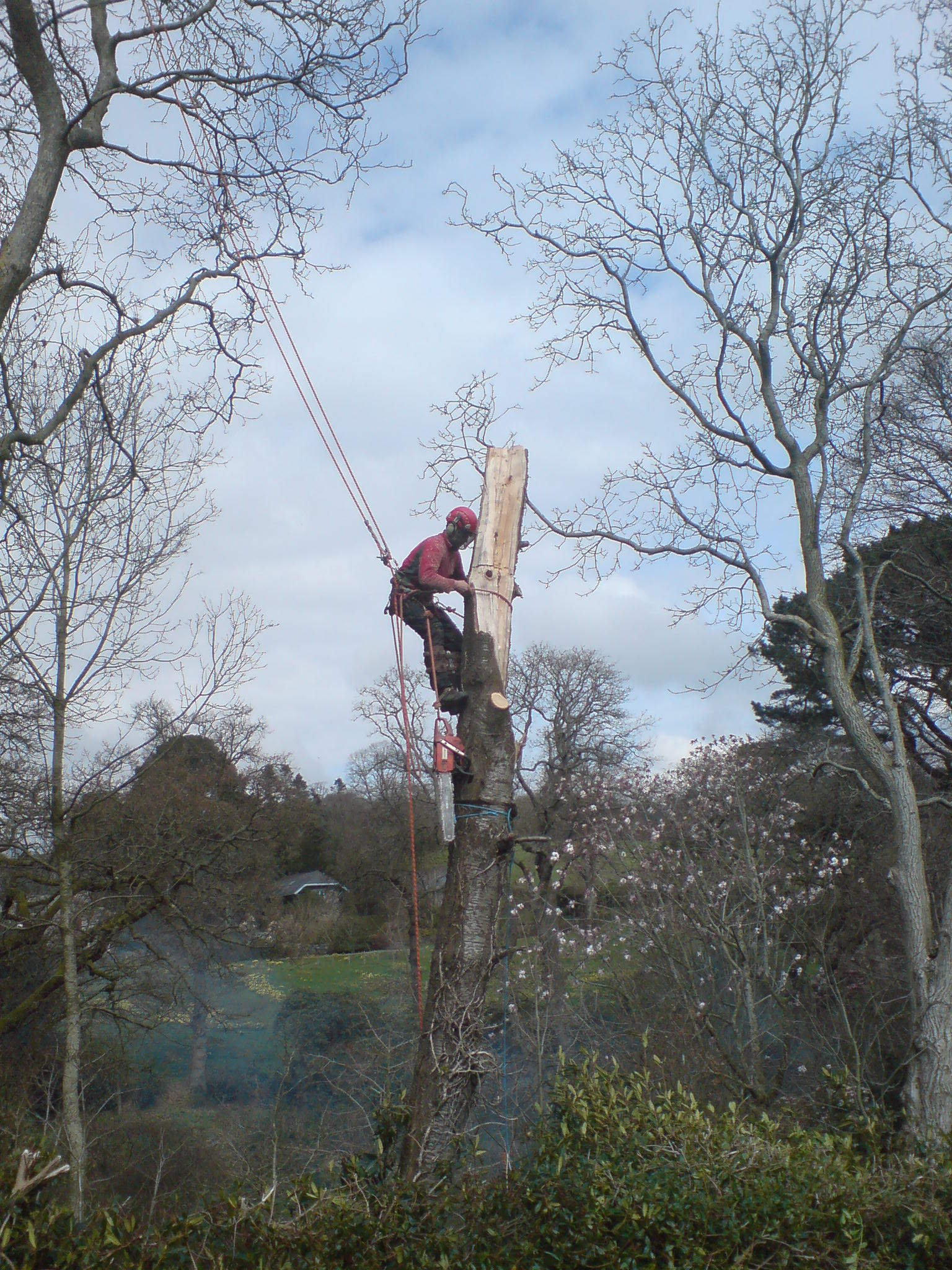 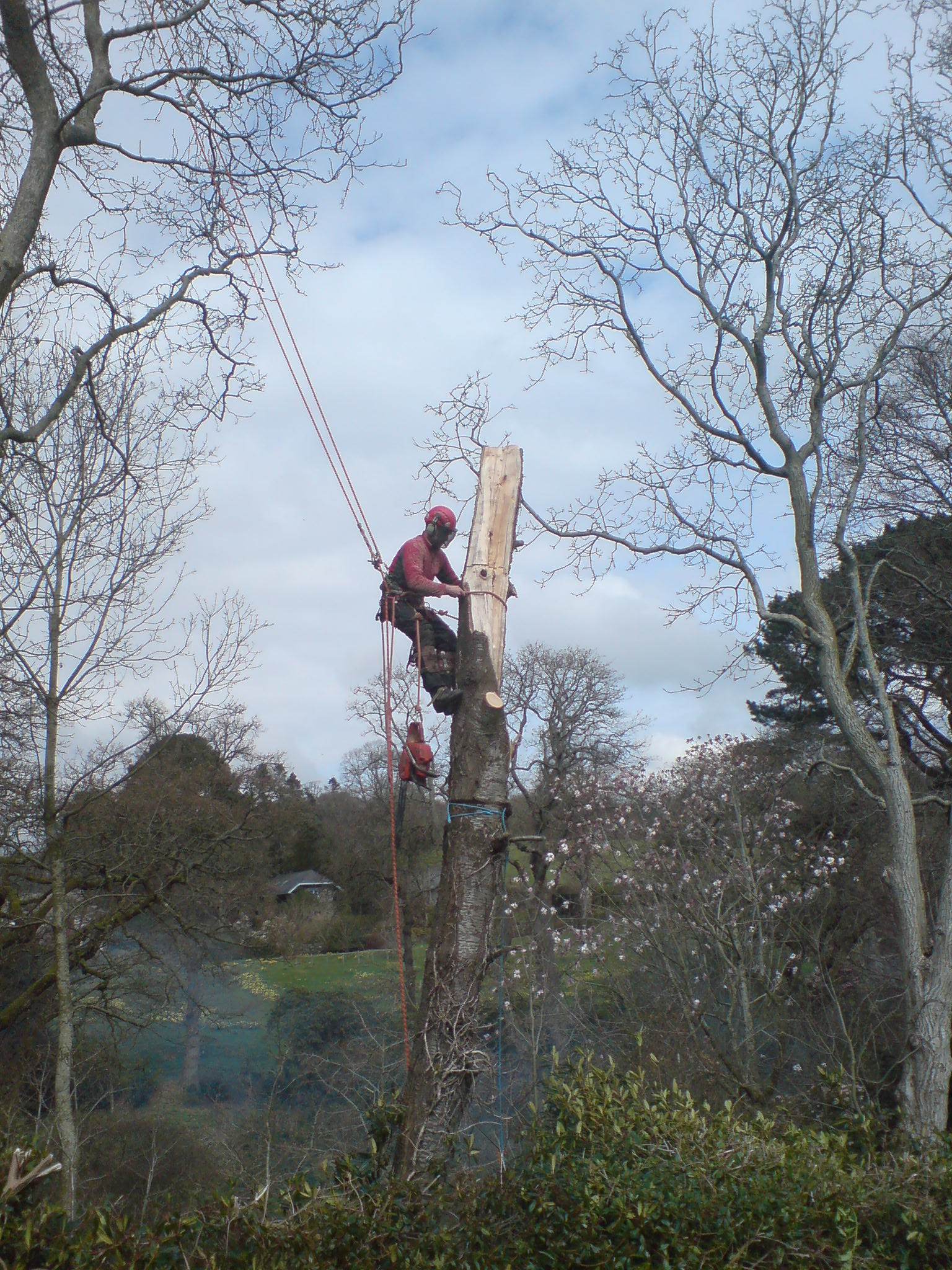 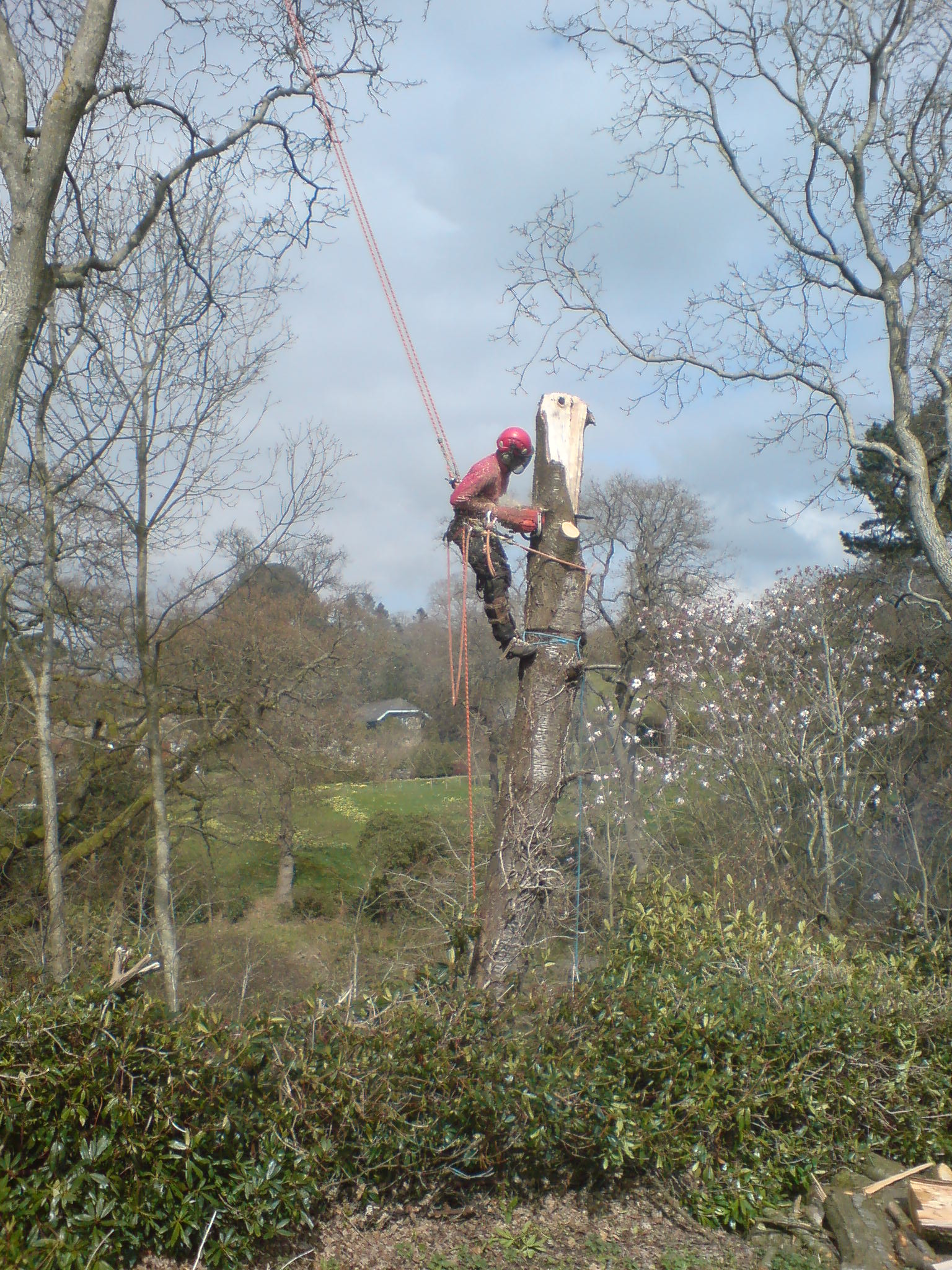 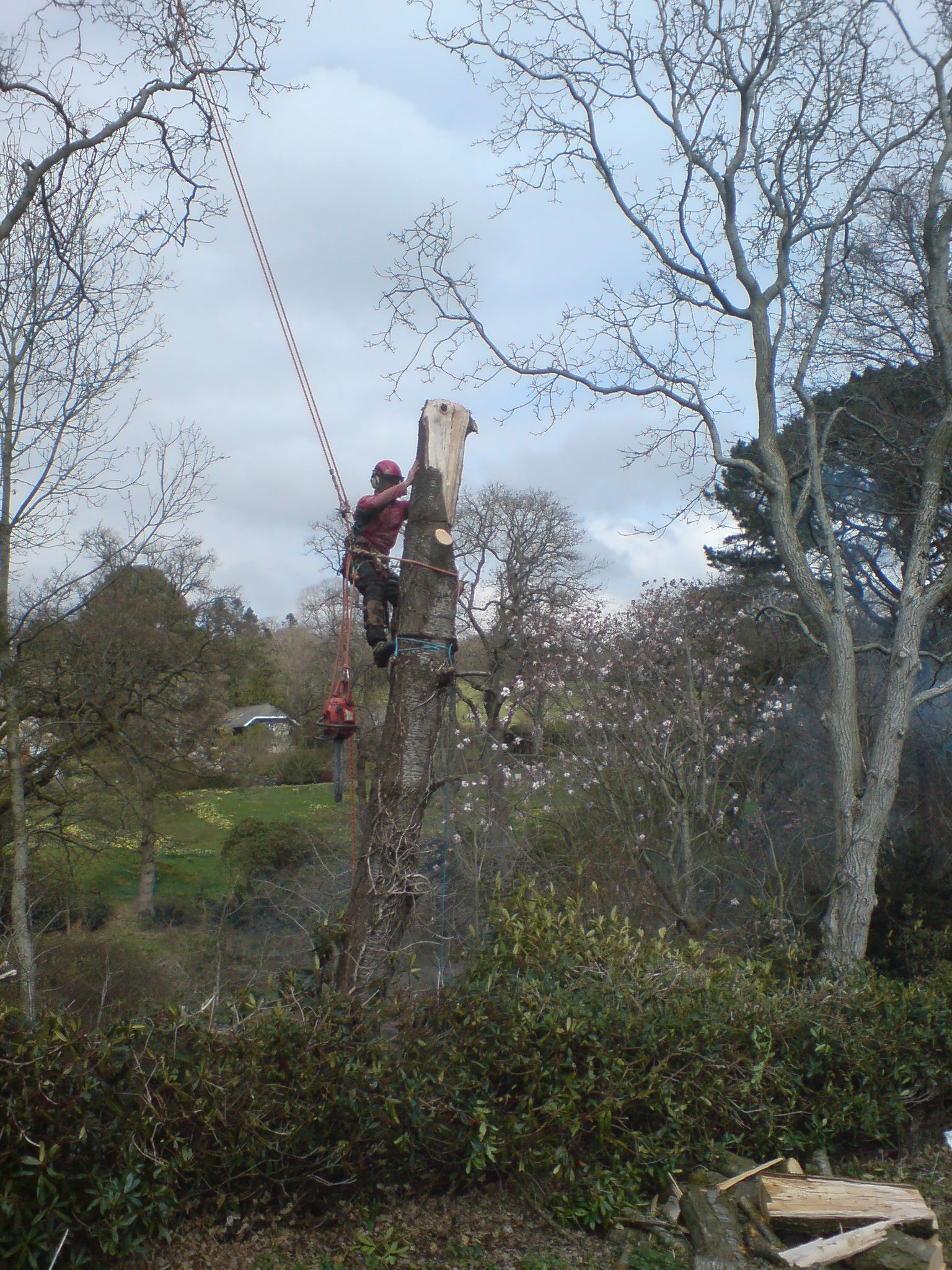 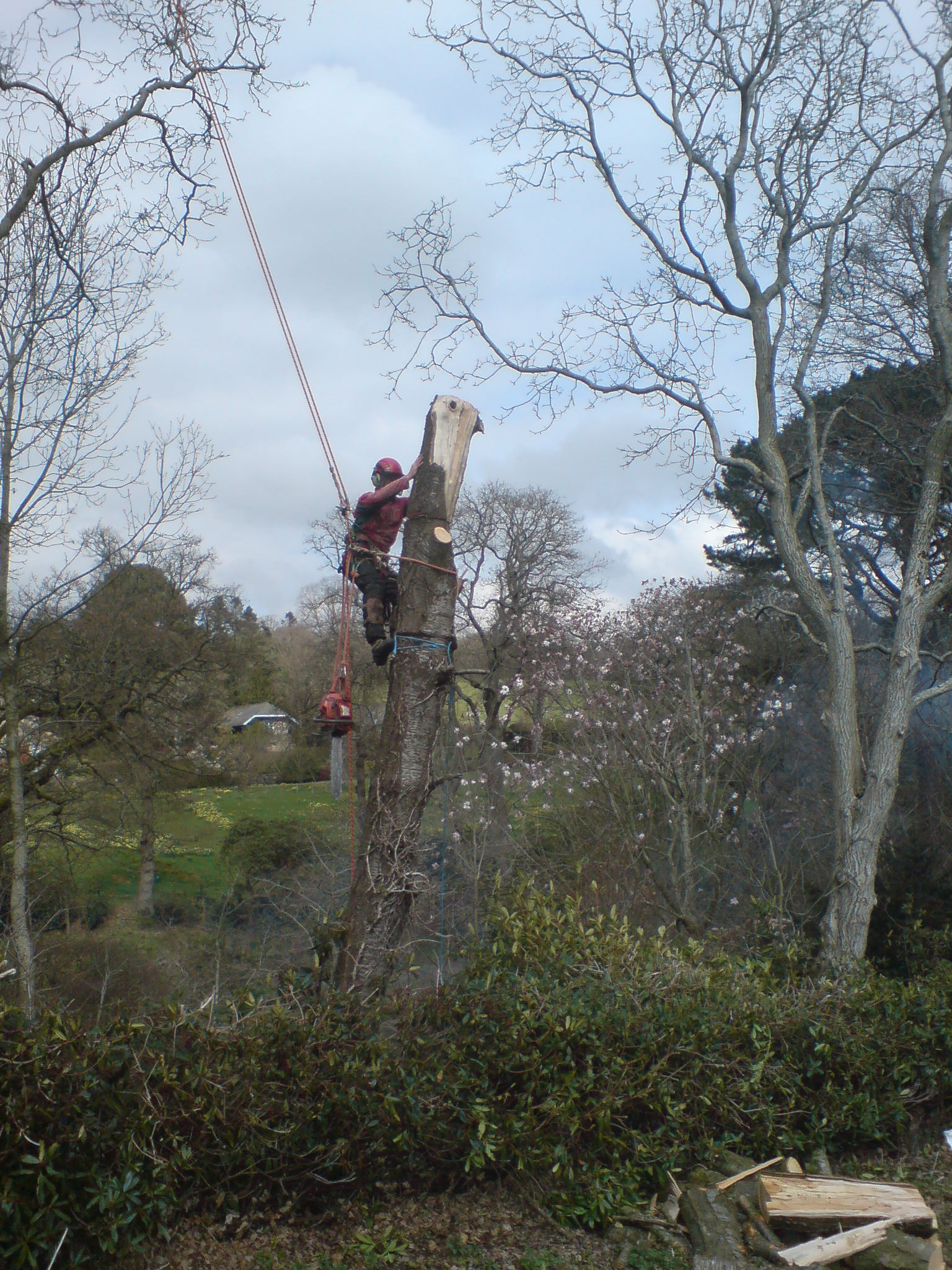 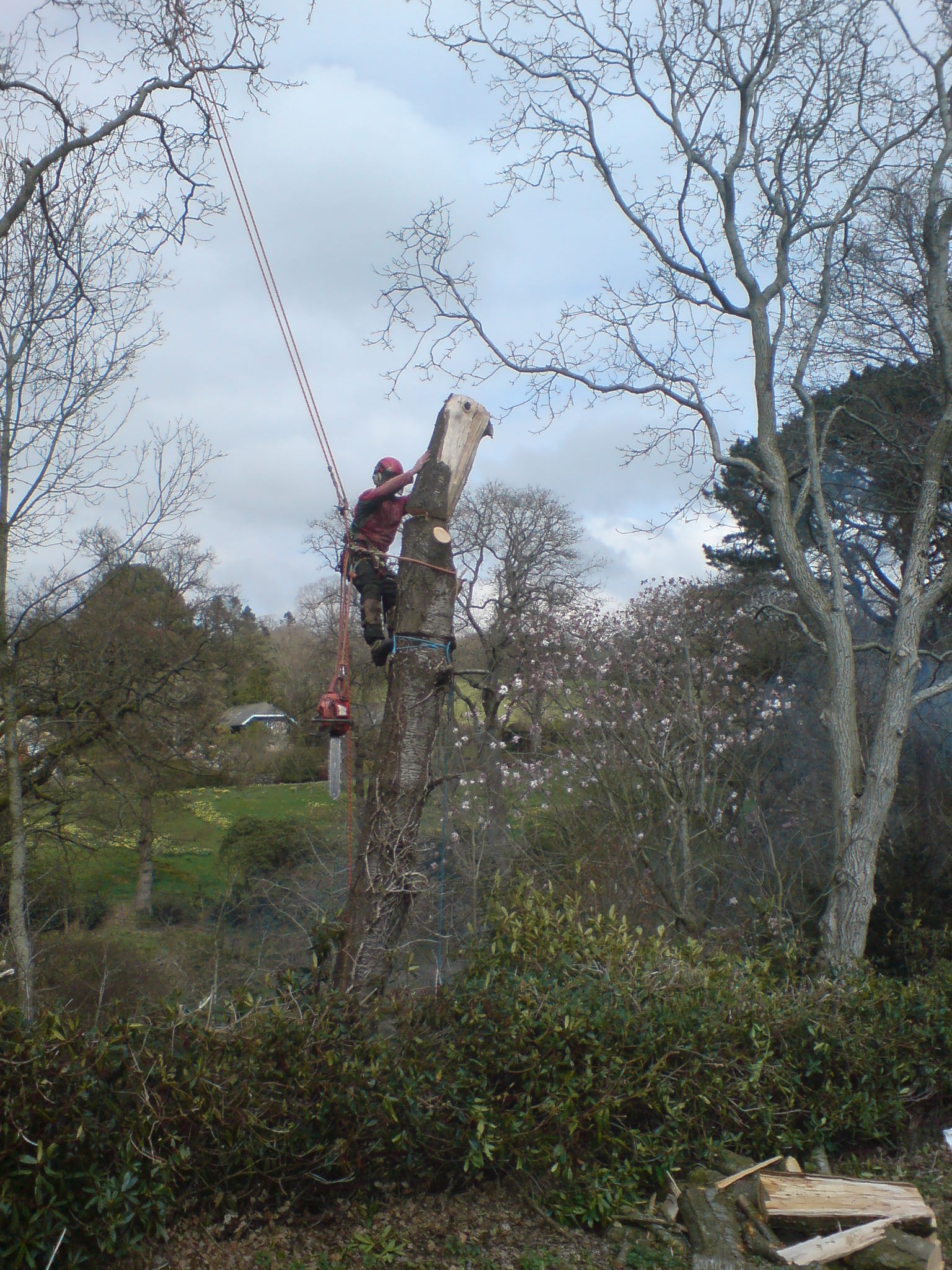 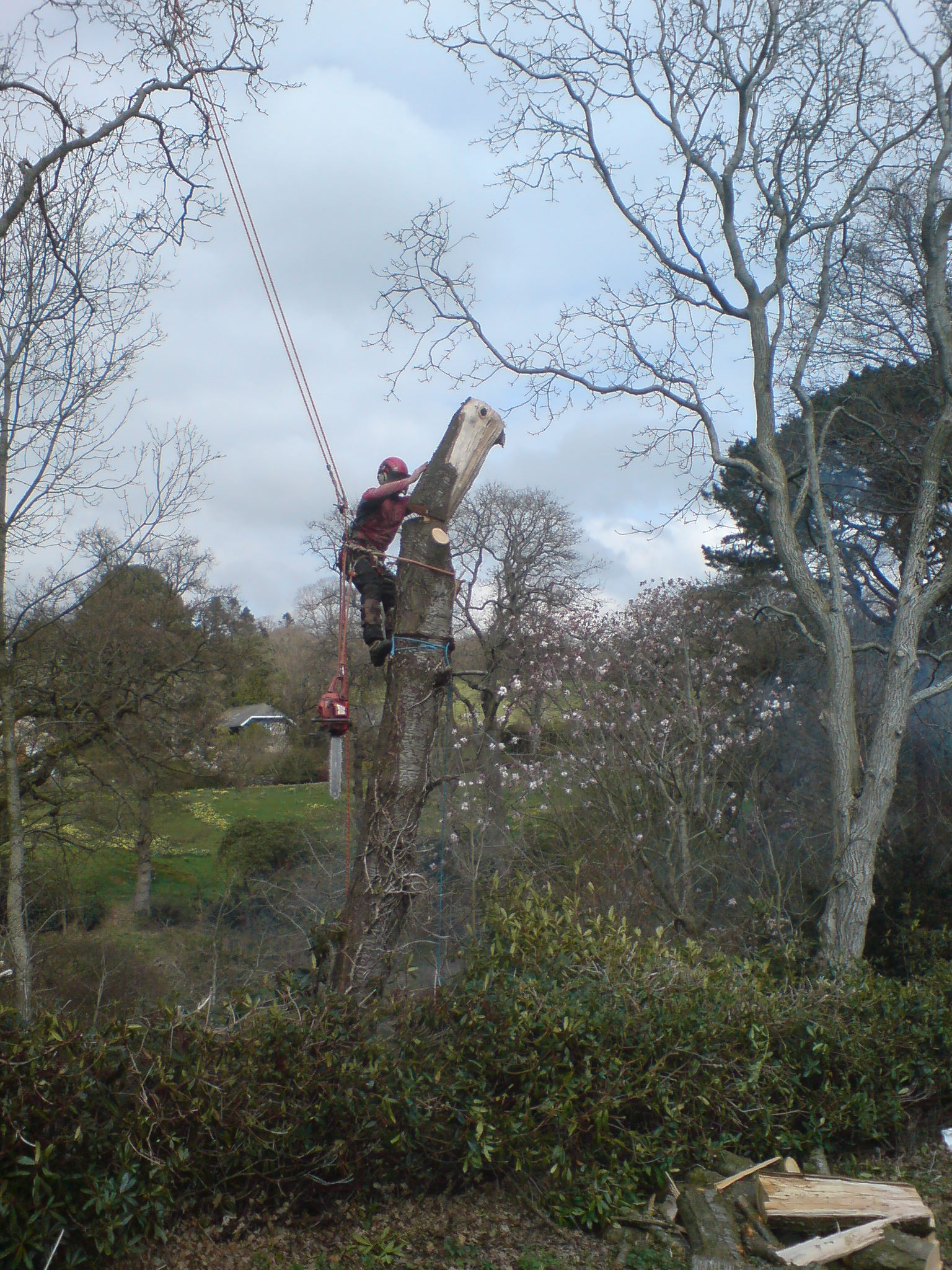 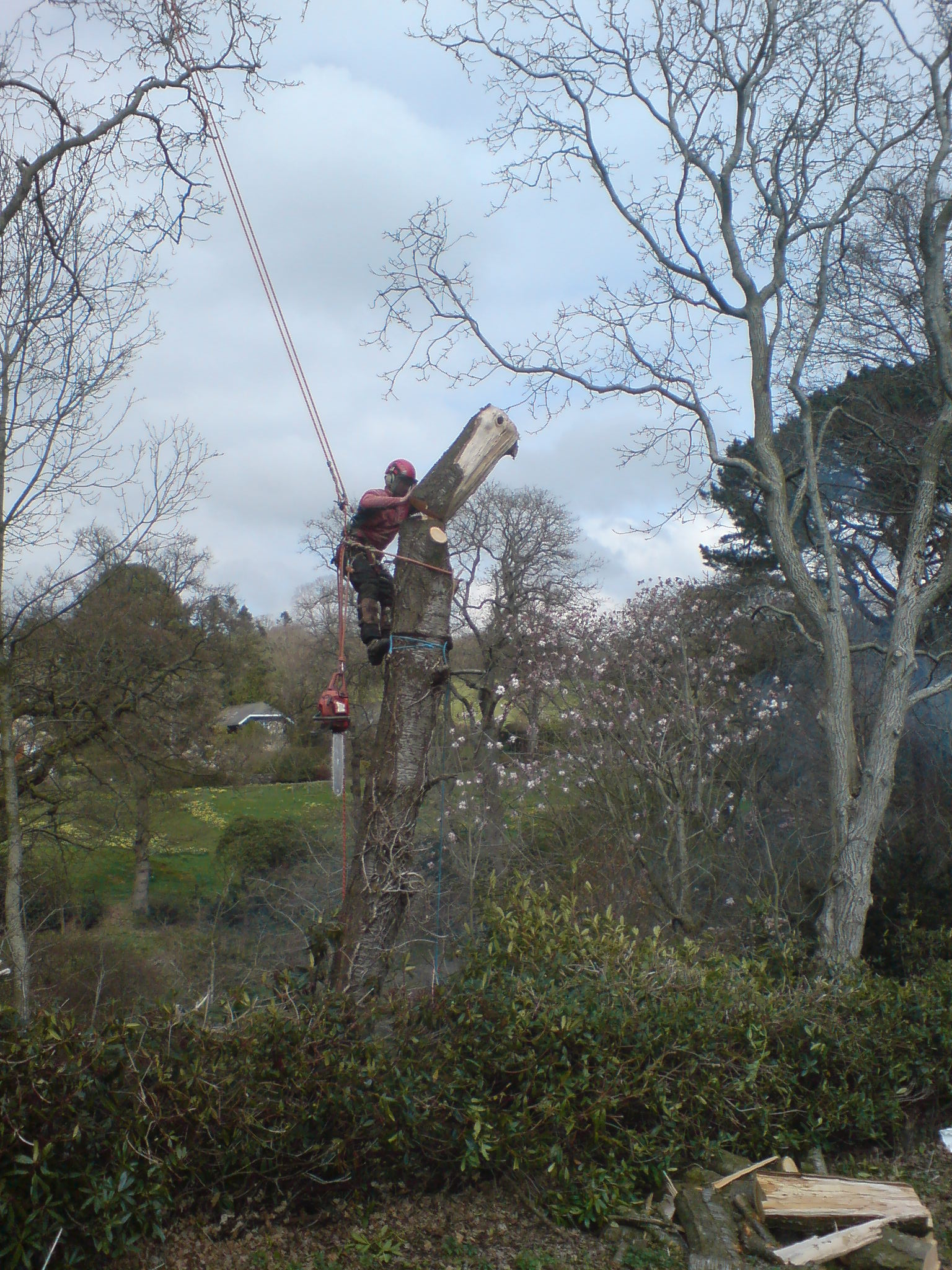 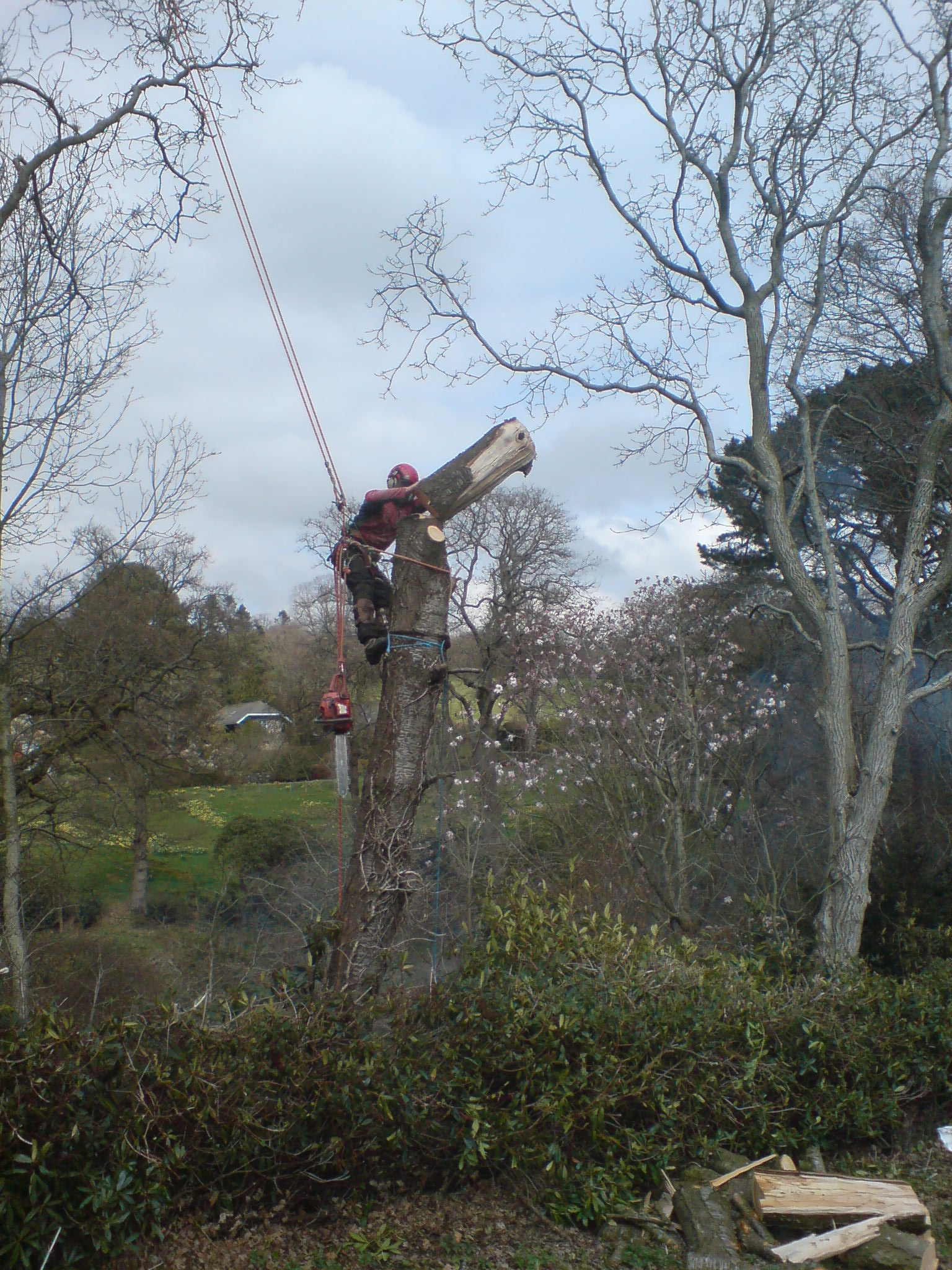 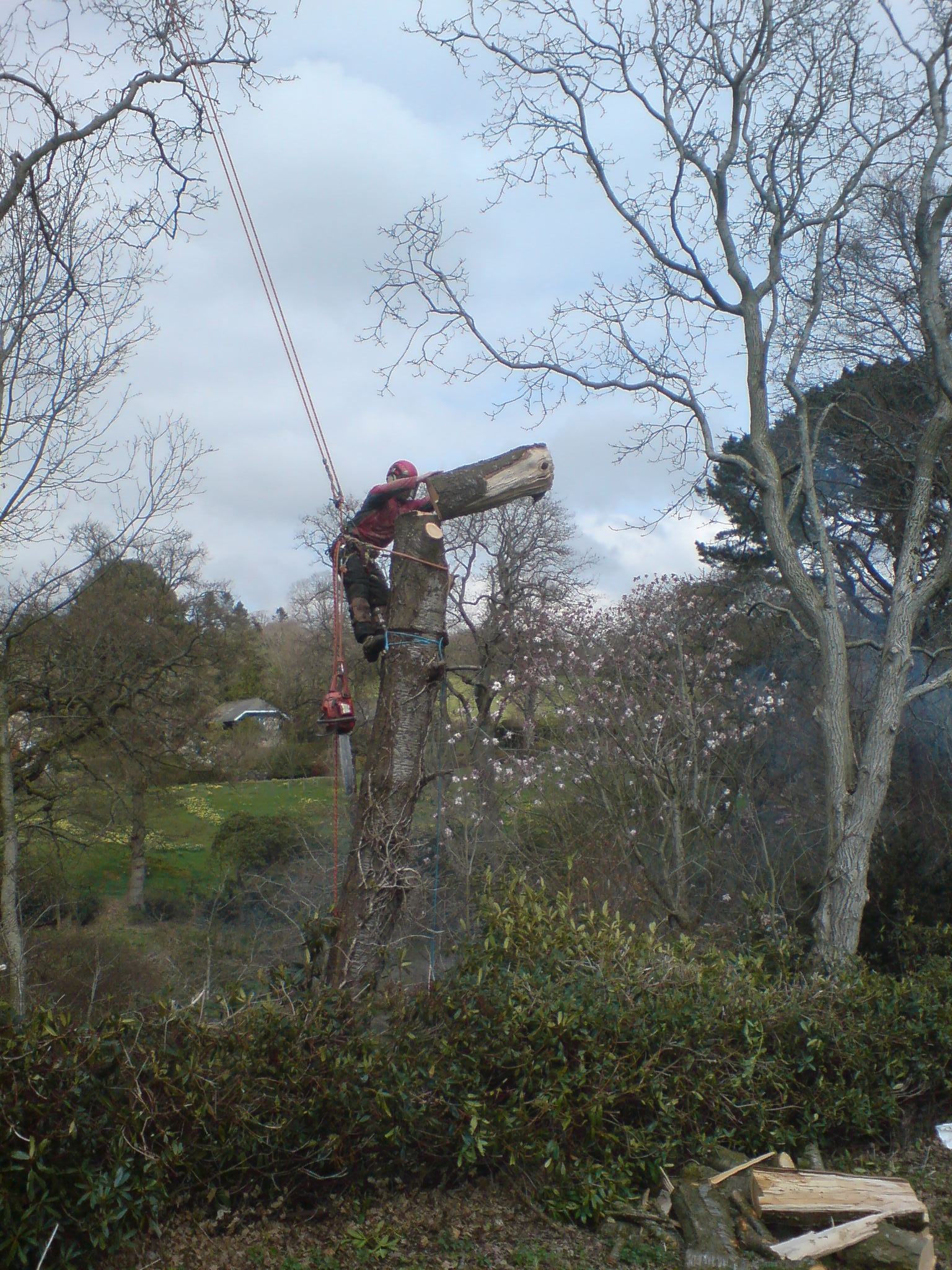 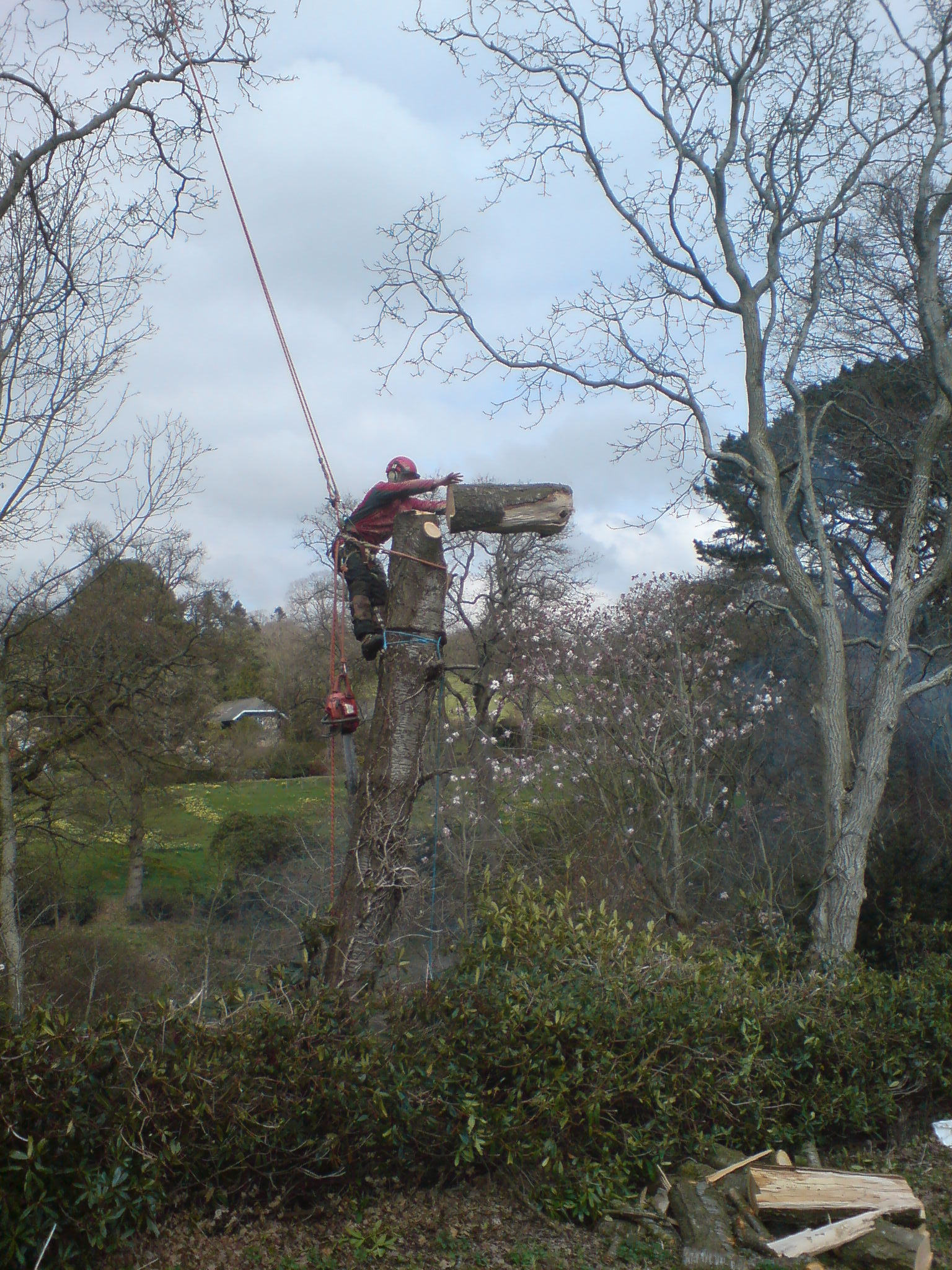 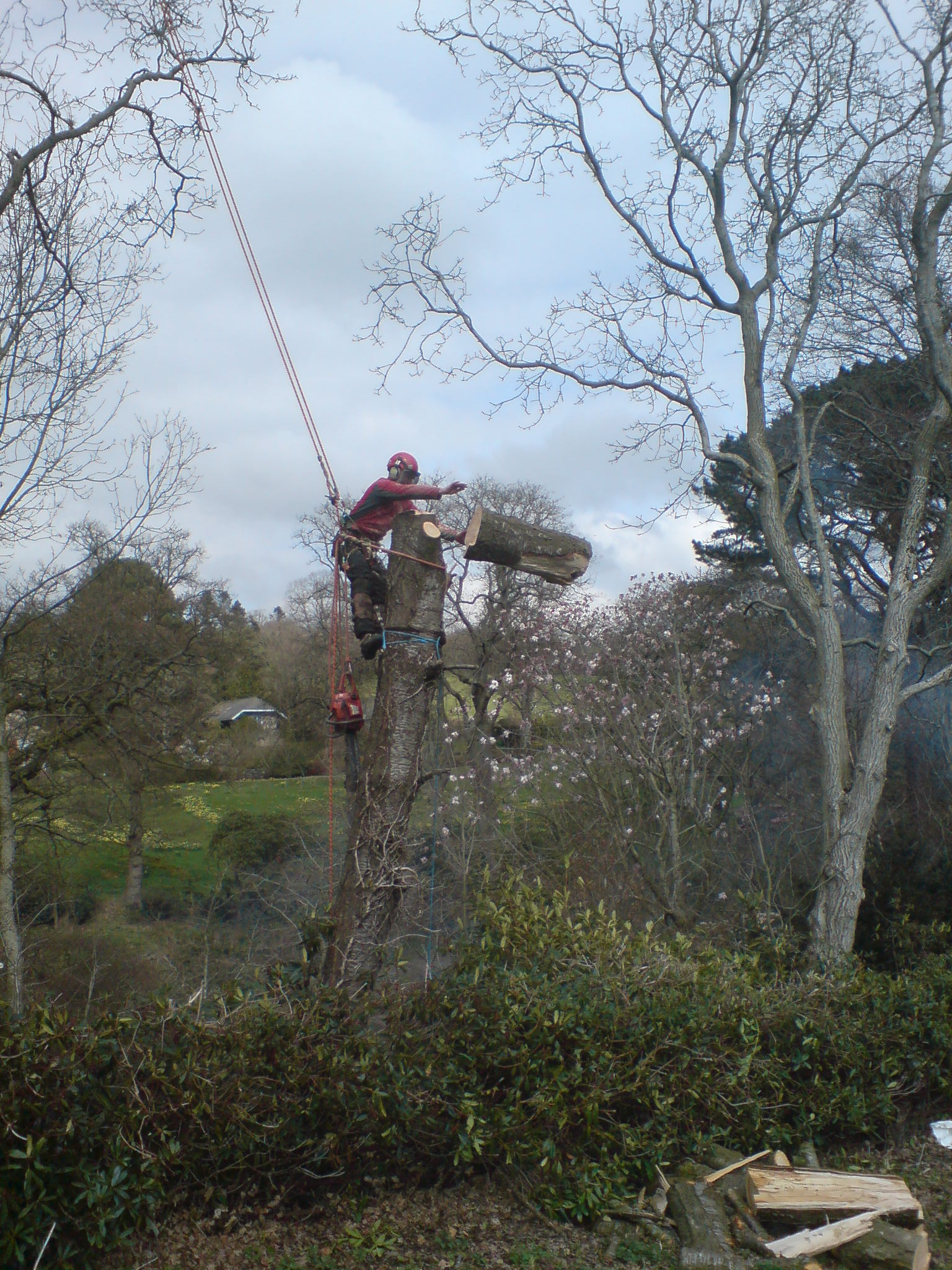 Occasionally we are lucky enough to have enough space to fell a whole tree or at least a big piece of it. The video clip below (if you watch it you might want to turn down the volume: Luke was stood a bit close to the microphone) shows John using his Tirfor winch to manually pull over a big dead beech tree trunk which Luke had climbed, stripped of side branches, attached the cable to and put the felling cuts into. As with all fells the direction of the fall was selected to avoid damaging anything within reach and achieved by the placement of the felling cuts. In this case we had to avoid the tree falling back onto the road and newly constructed footpath behind it or into the healthy trees on either side.

If a tree or bush is small enough, we can dig out the stump and major roots. If too big to be dug out we can either cut the stump to ground level and, depending on the species, poison it to prevent regrowth, or we can grind out the the stump to a depth of about 20cm and any major side roots. Stump grinding is a good choice if you think you might want to replant in the same spot. Here is Marcus helping a hazel stump on its way out using rope and pulleys to multiply leverage. He’s got the brains as well as the brawn.

If you have a tree that really has to go, please contact us for a free, no obligation quote. And remember: we can recommend and plant its replacement for you as well. It would be our pleasure.